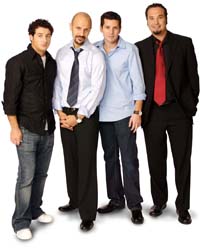 After gaining exposure from a Comedy Central special, the show – originally dubbed “The Arabian Knights” – was started and nurtured by the Comedy Store owner Mitzy Shore (yes, mom of Pauly) and has been steaming ahead, from Florida, Chicago and New York to Dallas, Vegas and Seattle, and, after Los Angeles, Amman, Jordan.

There’s a long history of ethnic comedy in America, and, with all that’s been going on in the Middle East, some would say, no better time than the present to explore, exploit and break down Middle Eastern stereotypes. (In a couple of years we might even be ready to admit a female to the Mid-East comedy roster.)

“Kill ’em with kindness” has got nothing on “teach them with laughter,” and these budding young comics – led by the hilarious Jobrani, who never disappoints – know it. A good mix of one-liners (“The bigger the chandelier, the better a Persian.” —Amini), the absurd (“There are a lot of Palestinians and Jews in the audience tonight. Whad’ya say we get together for a ham sandwich later?” —Tripoli) and the biting (Lebanese-American Nick Yusef’s account of having an Israeli audience member once “occupy” a part of his stage during an act) brought a diversity of technique and style to the themed show.

But, as expected, it was Jobrani who brought the house (packed with L.A.’s “Tehrangeles” community) down. With affectionate critiques of Persian society – cutting into everything from “tahrofe,” a compulsive habit, and Persian trait, to be polite … and slow everything down, to the Persian obsession with real estate (“America has become one big Monopoly set for us.”) – and such helpful tips as “Add a ‘my friend’ to the end of your sentence and now you’re speaking Middle Eastern,” Jobrani was at turns edgy, poignant, silly and earnest.

The Axis of Evil Comedy Tour may not be the funniest stand-up you’ve ever seen, but its relevance at this moment in American history pushes it to the top of anyone and everyone’s must-see list.