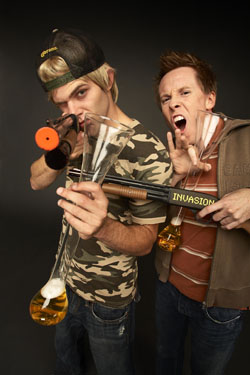 Had George Bernard Shaw seen the Groundlings’ “Shut up and Eat Your Groundlings,” he may have revised his deathbed quote: “Dying is easy, comedy is hard.” Not only does the troupe of sure-to-be-famous performers put together a hilarious sketch/improvisation show, they make it look effortless.

Several sketches, which were much better than the improvisation, were wet-your-pants funny. Mitch Silpa was amazing as the televangelist going out amongst the audience.

The show had some standout performers. Ben Falcone provided hardy guffaws as a party guest prone to saying ridiculous off-the-cuff remarks. He returned with Jim Cashman in a knee-slapper about two college roommates unaware of their flamboyant homosexuality.

Jeremy Rowley was brilliant as an incomprehensible public speaker mired in his own fear. Michaela Watkins got in a laugh or two as a high-paid eccentric attorney obsessed with her dim-bulb boyfriend.

One particular sketch, a multi-media extravaganza, stood out. An improv bit about a fly and a Venus Flytrap seemed to be perfectly choreographed to the music.

After the show, an eagle-eyed fan pointed out that the audience member that suggested the bit was a performer in the show. Though it violated the rules for improvisation, it was still a funny sketch.