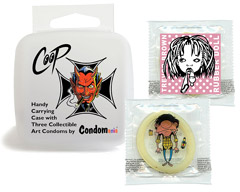 Ask any second-year Latin student what the ancients thought of fashion, and you’ll likely get this reply: Vestis virum reddit. In English, that’s “Clothes make the man.” So what does today’s well-dressed fellow don when he slips out of his toga?

If he’s truly au courant, he’ll be wearing an Art Condom. Adorning the packages of these playful jimmy hats are images from hot alt-comix and pop-illustration artists. Colorful and outrageous, the designs range from the snarky to the sexy to the just plain weird, ensuring the wearer will stand out in a sea of plain ol’, run-of-the-mill condoms.

YA GOTTA HAVE ART This brand-new line of hip love gloves is the pet project of Kevin Segall, director of sales and marketing at the safer-sex emporium Condomania.

“It’s part of our mission here at Condomania to make safer sex accessible, fun and exciting,” he tells. “The Art Condoms project has been a great opportunity to fulfill that goal while working with some of my favorite artists in the lowbrow art scene.”

Back in the 1990s, Segall founded the groundbreaking Essential Media Counterculture Catalog, a smorgasbord of cult films, hard-to-find music and underground comix. In selecting the best of the bizarre for the EMCC Web site and print catalogue, he built relationships with some of the biggest names in underground art. So when Segall recently brainstormed the idea of the wacky wet suits, he knew just where to turn.

“Most [of the artists] were extremely enthusiastic about the idea of promoting safer sex through their work,” Segall says.

Illustrator and graphic novelist Peter Kuper, whose condom package sports a bright Mexican wrestler’s mask, was all for it.

“Doing this design,” he reflects, “I’ve finally put my art to good use – to serve and protect!”

“I really loved the idea of putting my comic characters on condom wrappers,” he says. “It’s awesome to think that a guy has to look at my art and think about me for those few seconds before he sticks his penis in another human being.”

A PICTURE’S WORTH A THOUSAND SPURTS Some of the artists, like Kuper and Trevor Brown, created custom images just for their Art Condoms. Others, such as Ryan and Coop, generously allowed Condomania to reproduce some of their most widely known work. Segall says the most interesting challenge was working with Zap Comix and Juxtapoz magazine cofounder Robert Williams to painstakingly adapt his images (none of which were digital).

“I was so lucky to have the chance to collaborate on design with such a unique visionary,” raves Segall.

Among the Art Condoms line’s biggest sellers so far have been designs by Brown (“Rubber Doll,” a sweet-faced innocent with a used prophylactic hanging from her teeth), Coop (a quartet of devils and devilettes) and the Church of the SubGenius (DobbsHead condoms display a head shot of J.R. “Bob” Dobbs, and Conniedoms introduce the lovely Connie). Other condoms feature Peter Bagge’s Buddy Bradley character from Hate comics, Ron English’s paintings of alien and odd figures, Ryan’s comix characters and Winston Smith’s montage work.

Segall says his favorite so far is the Coochie Cootie Condom from Robert Williams (three other designs are available as well). The image shows the character holding up a painter’s palette.

“For me,” Segall explains, “it perfectly captures the spirit of the Art Condom line.”

ALL WRAPPED UP That line is about to get bigger. Segall reveals that renowned graphic artist Frank Kozik is on board to produce his own Art Condom.

But that’s not all, he adds: “A number of other important artists have shown interest, so we should have some big surprises coming up in the next few months.”

With so many cool designs, the only hard part is picking one. Art Condoms are sold by artist and by the dozen.

Also available are three-packs, which emblazon a reusable condom case with the chosen design. They’re sold at Condomania.com as well as in comic shops, bookstores (Amazon among them), art galleries and other safer-sex retailers.

So far, the product line has been a hit. It’s easy to understand why they’re the choice of fashionable men and those who love them (or love nailing them): Whipping out an Art Condom says, “Not only do I have great taste, but I love to have really fun safe sex!”