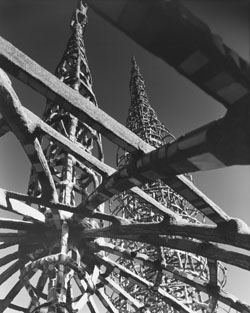 It’s fitting that Julius Shulman’s latest exhibition is taking place at the Central Library in downtown, as Shulman is as much of an Angelino cultural institution as the halls his photographs of Los Angeles inhabit. His architectural photographs could also not have found a better home than the ancient Egyptian inspired palace of books, one of the most inventive buildings in our city.

Shulman’s work is a love letter to Los Angeles, his home for the past 85 years. Over 150 rarely seen photographs document the changing landscape between the unchanging hills in which we reside.

His work spread California architecture around the world and ushered in a new appreciation for the photographing of art as an art itself. His Watts Towers, 1921-55 takes already artistically significant sculptures of steel and transforms them into an interplay of shadow, curves and an almost dystopian, if not prescient view, of what was to happen in this area years later.

Architecture can define an area, but it often stands cold against its artistic cousin painting, but Schulman infuses his photographs with personality, even if it’s an antisocial one. View of Bunker Hill from the Department of Water and Power Building (1971) is devoid of any signs of humanity, even though all the buildings present were crafted by thousands of hands.

There are seven photographic narratives taking place in Julius Shulman’s Los Angeles including the development of Bunker Hill, Century City’s competition to be “downtown” and the exotic, post-modern landmarks like Grauman’s Chinese Theatre, the Getty Villa and the Egyptian Theatre. The exhibit also includes blueprints of future developments for visitors to contrast against Shulman’s historic gelatin prints.