Jake Paltrow: A Lovely Dream Comes to the Big Screen In The Good Night. 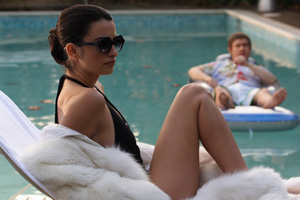 Jake Paltrow’s The Good Night is the latest in a long line of films that delve into the sophisticated inner-workings of the unconscious mind. Starring Martin Freeman and Gwyneth Paltrow, this comedy shows exactly what can happen when we let our dreams carry over into everyday life. Although he got his start directing groundbreaking television shows like “NYPD Blue” at an early age, The Good Night marks Paltrow’s debut as a film director.

He takes the advice passed on to him from his famous kin and factors that into his work with delicate ease. From his father, the late producer Bruce Paltrow, he received the following rule: “inspiration is not a gift.” From his mother, award-winning actress Blythe Danner, he received the ability to “really internalize the stuff [I] explore.”

In the movie, Freeman (from BBC’s “The Office”) plays Gary, a has-been songwriter who’s now recording commercial jingles. He’s in a repetitive relationship with Dora (Gwyneth Paltrow), but all the while he vividly dreams about a beautiful fantasy girl named Anna, played by Penélope Cruz. Yet, Gary’s world is turned upside down when his dreams become a reality, and he meets his “fantasy girl” in real life.

Like Gary in the film, Paltrow is also seeing his imagination come to life, but it wasn’t the love of a woman – it was the idea for this project.

“I awakened from a very fulfilling dream,” says Paltrow, “and while laying in bed, [I felt] this great emotion drift away.” He decided to craft the movie around having a dream you wanted to get back to in real life.

The cast of this film includes many famous faces, not the least of which is his sister Gwyneth, who worked well with her brother.

According to him, “She’s an actor who really likes to put herself in the hands of a director.” Paltrow also nabbed the British comedy “dream team” of Freeman and Simon Pegg (Hot Fuzz), who are good friends in real life and helped flesh out Jake’s vision with their improvisational skills. In addition, singer Jarvis Cocker from the Brit pop band Pulp makes a cameo appearance.

However, for all the goodness attached to this project, there has also been a slew of online dissension against The Good Night. Critics have been polarized, likening the film to an unimaginative rip off of Michel Gondry’s The Science of Sleep (2006), down to the much more uneven Vanilla Sky (2001).

Most think pieces are esoteric as well as thought provoking. The Good Night is refreshing because it offers audiences a nice rest from the car chases and explosions found in many other Hollywood movies.

It’s a heartfelt, contemporary look at modern romance. Paltrow melds artistry with whispy fantasy sequences to really put the viewer within the subconscious of his main character (a rare feat when done well, like in 2004’s Eternal Sunshine of the Spotless Mind).

So what’s next for director Paltrow? With a smile he confesses, “It’s a movie about a liar.” Cryptic clues like that one are sure to get imaginations going. When asked if he will ever partner up with best friends Casey Affleck (Gone Baby Gone) and Joaquin Phoenix (We Own the Night), he lights up.

“You could do anything with those two guys,” admits Paltrow. “Those guys are the greatest actors in the world.”

Meanwhile, sister Gwyneth will portray Virginia “Pepper” Potts in the comic book to big screen adaptation of Iron Man in 2008. Pegg’s career has softened with the choice of much lighter roles than the ones that he has tackled for director Edgar Wright. He will play Scotty in the new Star Trek epic and gives a sweet albeit deeply comedic turn as a divorced dad in Run, Fat Boy, Run.

Starring actor Freeman has appeared in a slew of films in 2007 including Nightwatching and Rubbish. And Cruz is slated to tackle the role of Carla in Rob Marshall’s Nine, opposite stars like Catherine Zeta-Jones and Javier Bardem.

The Good Night is currently in select theaters.