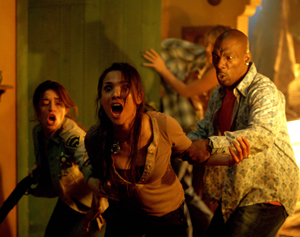 After reigning supreme during its inaugural year, After Dark Horrorfest 2007 has returned to scare people into a frenzy once again. Eight new horror flicks will disturb audiences on over 300 screens nationwide.

The one-week event has become the largest commercial film festival in the world. Horrorfest became the first film festival in history to break into the top 10 at the national box office, grossing over $2.5 million on only a quarter of the screens of any other film in the top 10 that weekend. The 8 Films to Die For package, released on DVD by Lionsgate Films, has over 1.8 million copies in circulation.

This year’s “8 Films to Die For” include Borderland, Crazy Eights, The Deaths of Ian Stone, Lake Dead, Mulberry Street, Nightmare Man, Tooth and Nail and Unearthed. The Deaths of Ian Stone tells the tale of average Joe, Ian Stone who believes he was attacked and forced in front of a moving train by a dead corpse and unfortunately can’t seem to stop reliving a terrifying nightmare. Unearthed captures the story of an invasion of creatures who begin to attack New Mexico townspeople.

Along with the screening of the horrifying films, another hopeful will be crowned Miss Horrorfest in Los Angeles on Nov. 8 at the Miss Horrorfest 2007 pageant at Basque nightclub. The top four finalists competing to become the next Queen of Scream are Countess Bathory, Mistress Malice, Nixon Suicide and Sweet Dead Sarah.

All finalists who submitted a 90-second audition video had a chance for their submission to be viewed and ranked by YouTube subscribers. The more views and the higher their ranks, the greater their chance was to be named 2007 Miss Horrorfest. The winner will receive $50,000 and a one-year contract as After Dark Films’ spokesperson.