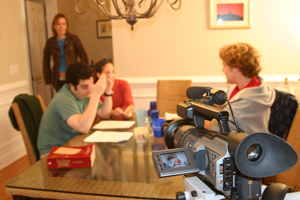 Seven years ago, four Emory University students came up with the idea to give computers, camcorders and training to other students to make their own short films and then share the five-minute clips that they created.

What started as a small project has now become the world’s largest student film festival. From the first 1,500 students, Campus MovieFest (CMF) has since been host to over 3,000 movies made by over 100,000 students from 25 different schools in the U.K. and United States.

On each campus’ specific Launch Date, student teams who have signed up beforehand can pick up an Apple laptop and a digital camcorder. They have one week to finish their films, with people from CMF providing any training and support the students may need.

Once the movies are turned in, a panel of students and staff from the school will judge the films. The top movies are showcased at a Campus MovieFest Finale celebration. The winning students walk away with tons of prizes.

In addition to having awarded over $300,000 in prizes to students, CMF also provides global exposure to students and musicians alike. Local musicians and bands are encouraged to submit their work for students to listen to and possibly use in their five-minute shorts.

CMF has also partnered with AT&T this year, so that AT&T customers can view winning CMF movies on their phones, furthering the exposure the student filmmakers receive.

With CMF at Whittier, Cal Poly Pomona, USC and UCLA this month, keep an eye out for the promising student-made films that are sure to emerge. Los Angeles’ top movies will be rewarded and featured at the L.A. Area Grand Finale on Nov. 13 at the Egyptian Theatre.

The Egyptian Theatre is located at 6712 Hollywood Boulevard in Los Angeles. For more information, visit www.campusmoviefest.com.