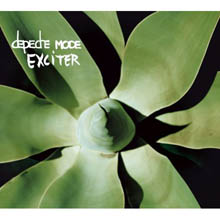 It’s a good thing Depeche Mode didn’t release Exciter and Ultra as a double album. That would have been a major mistake, given that the two strike an all-too-blatant resemblance to one another to the point where either of the albums could have been recorded and played on repeat.

With the Rhino Records reissues of 1997’s Ultra and 2001’s Exciter, Depeche Mode takes a stroll down memory lane to revisit two albums that exemplify the signature semi-goth, gloomy-pop sound that the English trio has developed in their 27-year career.

Depeche Mode fails to deliver anything truly noteworthy on either of these releases. Keeping a solemn, sluggish tempo and a desolate tone, both Ultra and Exciter are quite the bore except for a few select tracks.

Though the albums are nothing special, they do illustrate the evolution of the band’s instrumentation and development of their sound that once was sugary pop – remember “Just Can’t Get Enough?” – and is now as dark as frontman Dave Gahan’s black leather pants.

Ultra and Exciter are currently available.