The Ave Boyz: Partners in Rhyme 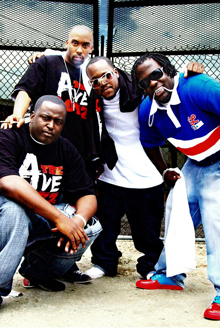 “We raised the bar for rappers,” says lyricist Ny’ne. “We made music, that no matter what era you are in – it could be 2025 – you can put in an Ave Boyz record, and you will still bang it.”

Ny’ne speaks big … but aspires to be bigger. How else could he justify calling himself “The Inland Empire’s Finest?” Such confidence permeates throughout Partners in Rhyme, which brings together four completely different lyricists under Titanium Avenue Records’ debut album.

Producer James “Chase Green” Brown set out to find one solid performer to launch his first project. After a couple trips to San Francisco, he found four – Ny’ne, Mr. META-4, Black Reese and Icy Mic B. Together, they are the Ave Boyz.

“I think the first album is heat,” adds Mr. META-4, who brings a varied blend of rap that’s influenced by East, West and Midwest hip-hop.

His style is distinct from the other three lyricists in the group, all of whom were working independent projects prior to collaborating on Partners in Rhyme. In fact, all four rappers plan to continue working independently after this project, occasionally reuniting for another group project in the future.

Ny’ne puts himself on blast, bringing rugged and raw lyrics to each track. Icy Mic B, who has his roots in R&B, brings social awareness to each track, rapping about truth and social justice. Black Reese is the battle-tested MC, who may spend more time working on his lyrics battling on a street corner instead of at the studio. Mr. META-4 is the all-in-one rapper, combining all styles into a lyrical story that can be compared to no one.

“Titanium is here to take over,” boasts Brown, who is the CEO of Titanium Avenue Records.

Don’t believe him? Check out

Partners in Rhyme and decide for yourself.