Steal A Pencil For Me: (Seventh Art Releasing/Red Envelope Entertainment) 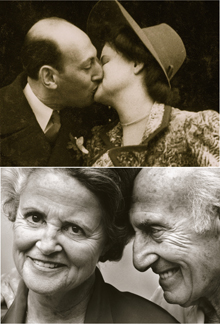 Hollywood doesn’t know love anymore. Somehow the romantic comedy replaced the love story, with mainstream slop like How to Lose a Guy in 10 Days tragically becoming the prototype for “genuine” romance.

As such, it’s beyond refreshing to see a film like Michèle Ohayon’s documentary Steal a Pencil for Me tell a story that doesn’t involve gimmicks or bad punch lines. It’s quite the opposite, actually.

Steal a Pencil For Me is the true love story of Jack and Ina, holocaust survivors who sustain themselves on secret love letters. Jack is interned with Ina and his mercurial wife at the time, Manja. After being separated from each other and surviving multiple concentration camps including Bergen-Belsen and Westerbork, Jack and Ina are liberated.

He immediately divorces Manja and miraculously reunites with Ina, but not before being hit with typhus and falling into a coma for two days. Jack and Ina celebrated their 60th wedding anniversary in January of 2006.

The film is beautifully shot with Academy Award nominee Ohayon gracefully interweaving heartfelt interviews and commentary. However, the execution of the film – for as well done as it is – doesn’t need to be addressed when considering the content.

Ohayon has found a couple whose love withstood the worst qualities of mankind and persevered without any apparent bitterness. Jack and Ina are happy in every sense of the word, as if their painful past was nothing more than a bad dream.

They look younger than ever suggesting their love literally slowed the aging process. Hollywood couldn’t fathom a story this touching.

Love as genuine as Jack and Ina’s can only be found in the harsh, refining flame of real life. Their journey is humbling, and their story incredible. Perhaps if studios took a note or two from Ohayon’s film, the next big budget romance flick might actually have meaning.

Steal a Pencil For Me releases in select theaters Nov. 9.