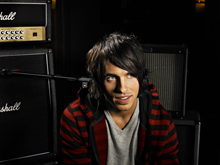 Justin Wilcynski, of the MTV hit series, “Kaya,” is not afraid to admit that he enjoys living with his grandma. She makes a mean chicken soup and is apparently just like George’s mom on “Seinfeld” – one of Wilcynski’s favorite shows.

The warm and friendly co-star of “Kaya” admits during our conversation that he’s the kind of person who has to be constantly engaged in something. This need to constantly do something productive – combined with his passion for music – transported Wilcynski from Paso Robles, Calif. to Los Angeles to pursue music.

However, much like the fickle bride who gets the ring and walks out on the wedding, the band he was in split right after finally signing their “big” production deal, a split Wilcynski compares to “breaking up with some girl you dated for six years.”

His decision to pursue acting emerged as a natural recourse to his unpleasant circumstances; he had loved drama since middle school and felt it would be a great way to go. His big break surfaced as a series of Target commercials, followed by a role in an indy film called Dependency, which served as a turning point for him.

“I never had so much fun working in my life,” he shares.

Following his string of commercials and foray into film, he pursued different acting opportunities, eventually landing a role as Taylor on the new scripted MTV series, “Kaya,” which chronicles the adventures and misadventures of Kaya and her band, Crossing Clearwater, a group of (barely)-20-somethings whose first homegrown record goes platinum and leads them to their first big record deal. What the idealistic Kaya and her band mates don’t realize is the price of fame – in terms of both artistic autonomy and interpersonal relationships.

“Kaya” can very well be criticized for manufacturing yet another Hollywood cliché: the lead singer’s persona seems to be an obvious conflation of different high profile young female singers who deal with the trials and tribulations of fame. She is one part Avril, one part Jessica and one part Britney; at the end of the day, all parts are predictable. It’s difficult, at points, to see what, if anything, is entirely unique about the concept of the show.

“It’s bringing out a lot of scandals that have happened in the tabloids. It’s a more personal look into what-could-have-happened with anybody in their position. They wanted to bring pop culture to light in a negative kind of way. It’s kind of like a what-not-to-do handbook,” Wilcynski says, describing the show as more of a critique of Hollywood culture.

Additionally, it’s authentic, production-wise. Being an actor alone wasn’t enough to get the part; MTV specifically hired actors that were musicians, spending an extra two weeks (and a lot of their budget) just training their cast to be the band they were representing on MTV.

They really wanted their first scripted series in a while to be something legit; so, to bring street cred to the show, they wanted to film them actually playing. The actors on MTV’s “Kaya” don’t just walk the walk; they are the band.

Living like rock stars brings out the unsavory portions of Taylor’s antagonistic personality.

“My character just indulges in everything,” Justin says.

He describes him as a jaded, indecisive, neglected rich kid.

“He’s just really rebellious to everything his parents were."

He describes his character as replete with insecurities, and willing to compensate for it “by being loud and impulsive.”

Most important, however, Taylor is greedy.

“Probably like most men, he wants what he can’t have.”

Or at least, wants what he can’t have easily. One of these things is his lead-singer-slash-bandmate Kaya. Taylor’s growing romantic attraction to her is rapidly starting to pull at the band’s seams.

Is Kaya the Yoko Ono of her own band? Or is romantic conflict a pre-requisite for a good show and really good music?