UCLA & USC Basketball Preview: L.A. May Be In Store For One of the Best Seasons Ever 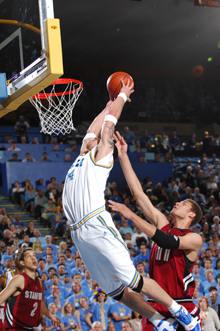 They say the “big man” is a lost art in the sport of basketball. I say who are “they”?

The NBA may only have Shaq, Tim Duncan and Yao Ming – but one look at the Pac-10, and you would think you were in the land of giants. All you have to do is look at some of the top teams in the league.

Oh, and let us not forget the two schools here in Los Angeles – Taj Gibson playing the post at Galen Center for USC and the three-headed monster of Lorenzo Mata-Real, Luc Richard Mbah a Moute and Kevin Love at UCLA. So if you feel rumblings and earthquakes up and down the Pacific, it’s not seismic activity.

Instead, you will get a Richter scale reading from Dick Vitale, who will probably be watching a lot of Pac-10 games late at night this season. After all, with all these big men in one conference, we should be in store for some epic battles!

With that, let’s take a look at our two local powerhouses in UCLA and USC.

For two years, the only team in the nation that was better than UCLA was Florida. If the Bruins beat Florida just once, perhaps UCLA would have their 12th, maybe 13th national championship.

Alas, the Bruins will face stiffer competition in the 2007-08 season – within their own conference, no less. That doesn’t mean that UCLA will not have another solid run this season.

In fact, we can see UCLA return to the Final Four for the third straight year, especially with the talent – and coaching – that will be playing in Westwood. As with most successful college basketball programs, coaching makes all the difference. UCLA did the right thing in signing Ben Howland to a seven-year contract extension that will keep him at the helm through the 2013-14 Season.

Obviously, he’s doing something right. Not only did the Bruins reach the Final Four in consecutive years under Howland, they’re also ranked No. 2 in various pre-season polls. With that, expectations are high this year, and anything less than an appearance in the national championship game will be a disappointment.

Of course, UCLA is not a top-ranked team just because of Howland. They are the team to beat this year because of the players that Howland recruited.

His biggest recruit may be the biggest prize of them all – big man Love from Lake Oswego, Ore. The biggest cap against the Bruins the last two years is their lack of size inside, despite decent big men in Mata-Real and Mbah a Moute.

But bringing in Love will fill the void in the paint, and also make up for the loss of Aaron Afflalo. He brings a solid low-post game and passing skills that make many point guards look like amateurs.

Speaking of passing skills, Darren Collison, who led the Pac-10 in assists last season, returns as the floor general. With every other Bruin other than Afflalo returning this year, this may be a better UCLA team than the previous two that made the Final Four with Afflalo and Jordan Farmar.

The Bruins were 30-6 last season, including a 15-3 mark in Pac-10 play, good enough to win the regular season title. Expect this year’s Bruins to have a similar season, winning between 30 and 32 games, and a 16-2 record in league play – with one loss to Cal (big match-up against Hardin) and another loss to … USC.

The USC Athletic Department went all out to bring respect to the basketball program. Last season, the Trojans made some noise with a deep tournament run (losing in the Sweet 16). Many expect greater things this season, especially with the return of Gibson … and the arrival of O.J. Mayo and Davon Jefferson.

It may be a slow start, what with Gabe Pruitt and Nick Young officially in the NBA. Yet Tim Floyd will have his young team – which finally has star power in Mayo – working hard to top the school-record 25 wins in 2006-2007.

Mayo and Gibson will be the focus of the Trojan offense – and probably the only two players guaranteed a starter job. Gibson was the leading scorer and rebounder for USC last season, and he should have several double-doubles in his junior season.

While USC has a legitimate shot to finish second in the Pac-10 and make a run to the Final Four, there are three major questions for the Trojans:

Who will start? We already know that Mayo and Gibson will start, but the other three spots – one guard and two forwards – are still to be determined. Daniel Hackett will probably get the other guard spot, but that’s not a lock. With so many players in their sophomore season, Floyd may need about 10 games to determine who will be in his starting five.

Inexperienced? The Trojans only have two upperclassmen … and seven freshmen. If the Trojans do not make the Final Four, it will be because of lack of experience. Then again, in an age of “one-and-done,” how many teams actually have an “experienced” roster (besides UCLA)?

What about defense? Pruitt was the Trojan defensive-stopper last season. With such a young team, who will step up on defense this year, especially with the size that dominated the nation’s top conference (which USC happens to belong to). If the Trojans cannot play defense, they can kiss away any hopes they have of another deep tournament run – even with Mayo.

Nonetheless, expect the Trojans to be a top three team in the Pac-10, competing with Cal for second-place honors behind UCLA. Another 25-win season is definitely a possibility, but with a tough non-conference schedule, most of those wins would have to come in league play – at least 14 wins in Pac-10 play if they really want to make any noise this year. It is very possible that USC beats UCLA once this season, probably at Galen Center.

Unlike college football, Los Angeles will actually experience one of the best college basketball seasons ever if both UCLA and USC play to expectations … just don’t fill in UCLA or USC in the National Championship Game of your brackets.