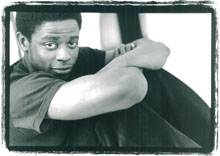 Dulé Hill has been acting, singing and dancing since age 10. He was the understudy for Savion Glover in Broadway’s “The Tap Dance Kid,” and while at Seton Hall University, he again starred alongside Glover in “Bring in ’da Noise, Bring in ’da Funk.”
Then in 1999, Hill scored his big Hollywood break. He snagged the role of Charlie Young, body man to President Josiah Bartlet (played by Martin Sheen) on “The West Wing,” and was nominated for an Emmy in 2002. He stayed on for six seasons before switching to “Psych,” playing funnyman Burton “Gus” Guster.

“Both ‘West Wing’ and ‘Psych’ have allowed me to work on my art form,” Hill shares. “‘West Wing’ was the greatest classroom with top caliber actors, writer Aaron Sorkin, director Thomas Schlamme; it was the perfect situation for me to work on myself and to keep getting better.

“With ‘Psych’ I get to work on my comic chops. Gus is lighter, funnier and I can have more fun with myself.”

“Psych” will air season 2.5 (the second part of season two) starting in November and starts filming season three in March.

“‘Psych’ takes a lot of time and hours. ‘West Wing’ was an easy ride compared to this. But it’s been a great ride,” he assures.

Though he currently focuses the majority of his time on acting, he admits: “Once a tap dancer, always a tap dancer.”

He donates his time and skills on occasion to Everybody Dance, an organization that provides dance instruction at little or no cost to ethnically diverse, economically disadvantaged children.

These days, Hill has no complaints. “I love what I do.”