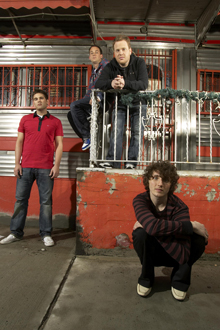 “If Say It Like You Mean It and Based on a True Story had a baby that was super good looking and really talented, could slam dunk and run really fast, it would be this record,” says Starting Line guitarist Matt Watts of his band’s latest effort, Direction.

While the album may or may not actually be the musical equivalent of Brad and Angelina’s kid, Watts is confident it will find a comfortable home in the album collections of fans both old and new.

“I think it shows our musical growth but also retains those hooks that kids loved on the first record,” he says.

More importantly with this album, Watts, fellow guitarist Mike Golla, drummer Tom Gryskiewicz, keyboardist Brian Schmutz and singer and bassist Kenny Vasoli, are just stoked on their music and the making of it, something Watts admits wasn’t always the case not so long ago.

“On the last record, the mood wasn’t as positive as we are as people,” he says. “We were going through a tough time with Geffen Records, it was an uphill battle to make the record, and I think we were just at a low point in our career. This time, the album came out on Virgin, and after we got let go from Geffen, we realized we were kind of like a brand new band, and we could do whatever we want. We really chose our team carefully, and I think this is the most optimistic we’ve been since we first started the band, and it definitely reflected on the record.”

Though many bands don’t have the luxury of continued success after parting ways with a major label on not entirely amicable terms, much less having a blank slate to start from, Watts hopes to make the most of their opportunity for both.

“We’re always trying to improve ourselves, improve musically and challenge ourselves in the writing process and not put out the same record twice,” he says. “We’ve always looked up to bands like Saves the Day who have challenged themselves like that, and I respect bands like that so much. Hopefully, people will value that.” Recalling his band’s stay on this year’s Vans Warped Tour he says, “I finally feel like we’re that band that other musicians kind of like. Ben from Throwdown was watching us from stage, and I remember last Warped Tour we did, Tim Armstrong was watching us from stage. Our musical peers that we really look up to and value their opinions are fans of it and that’s really cool. It makes me feel like I can sit at the cool kids’ table now.”

Much as he may joke about being wide-eyed at the prospect of other musicians liking his band, Watts remains humbled by the level of support and dedication shown by Starting Line fans.

“There have been a few people who have come up and said a certain song saved their life, which is crazy but that’s the biggest compliment you could ever give somebody. It’s crazy to think about the magnitude of that,” he says.

Citing influences ranging from Nirvana to NOFX to Mineral to Jimmy Eat World, Watts can understand where they come from, however.

“Those bands I get stoked on and still listen to, to this day,” he says. “I want our records to capture that. I want kids to put on our record 10 years from now and have the same feeling that they felt the first day they picked it up. I think that’s a really hard thing to capture, but I think it’s possible.” Looking at where these Philadelphia kids started out, from being “barely able to play their instruments in VFW halls,” it has undoubtedly been a long path to the chart-topping, respected rock act they are now. And though they’ve faced their share of detours, setbacks and wrong turns, if things continue as they’re going now, the members of the Starting Line shouldn’t have any difficulty finding their way.

Direction is currently available. The band will perform Nov. 9 at the Grove and Nov. 14 at the Wiltern. For more information, visit www.startinglinerock.com.