What Would Jesus Buy?: Following Reverend Billy Down the Road to Consumer Redemption 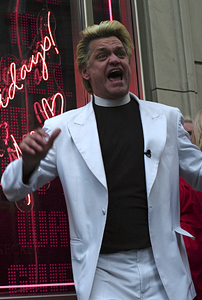 When asked during a CNN broadcast what he’s trying to tell people with his message, the Reverend Billy bellows, “We’re trying to get them to slow down their consumption. We’re addicted. We’re conflicted. We’re hypnotized, consumerized!”

So what’s the problem?

What Would Jesus Buy? follows Bill Talen’s “altar” ego Reverend Billy and his Stop Shopping Choir on a month-long, cross country, anti-shopping crusade from Black Friday through Christmas. Their experiences will make you laugh and make you think.

They start on the day after Thanksgiving. Traditionally the first day of the Christmas shopping season, it’s known as “Black Friday” in the retail world for the hopes that the books will be “in the black” after shoppers hit the stores in droves.

His journey culminates on Christmas Day in Anaheim, Calif. What happens in between is heartwarming, inspiring, hysterical, emotional and life changing.

Just to be clear, this is not a religious film. The message is a message for everybody.

The reverend dresses in a collar and the congregation in bright red choir robes. They sing and dance their message from town to town. When knocking on doors singing their own version of Christmas carols, making local television appearances and protesting live at shops and malls, it’s apparent that many people are smiling and applauding the troupe.

The Church of Stop Shopping is described in the film as a “comedy performance group.” They are on a mission to stop what they humorously refer to as the “Shopocalypse” and to get folks to look a little more closely at their unnecessarily over-indulgent consumerism and the affect that it’s having on our world.

“We’re proceeding into the shopping season under an enormous misunderstanding. We think that we are consumers at Christmastime. No! We are being consumed at Christmastime,” preaches the reverend at one of their performances.

Everyone from TV news anchors to our own families tells us to shop. Our friends, co-workers and neighbors all chat about their recent acquisitions. They brag about how far along they are and how early they started this year. It has been programmed into us for generations – so how do we change things now?

“To give and receive can be so much more personal and special than just buying something for someone at a store,” Reverend Billy explains.

Director Rob Van Alkemade agrees. “We have taken for granted the irreversibility of things. We need to personally re-evaluate our beliefs and priorities and relationships.”

In most developed nations it’s illegal to advertise to children under 12, but here in the United States we regularly target children as young as three years old with commercials and product placement geared to make them drool. Our need for brand name cheer is killing downtown U.S.A. and fueling a system that keeps other parts of the world in poverty. Their children are in perpetual servitude so that ours can be just a little bit more spoiled.

“If we could achieve anything [with this film] it would be to get American consumers to take a minute before they buy something to read the label and ask, ‘Where did this come from?’” says producer Morgan Spurlock (Super Size Me, “30 Days”).

“It all comes down to us. We can change the way we make choices, buy locally, shop in smaller shops for American-made products [and] support the local community,” he adds.

Imagine Christmas through the eyes of an American child. They probably spend the night before the holiday tossing and turning in anticipation of the moment they get to open all of those beautifully wrapped gifts waiting beneath the tree. Surely Santa will have stopped by while the children were nestled all snug in their beds.

Whether you celebrate Christmas or not, try to remember what things were like in general when you were seven years old. The hardest thing you probably had to do all day was get out of bed. Maybe there was a particularly challenging test in school one day. Maybe you had a doctor’s appointment or dentist’s visit that you were dreading.

Now let’s try something different. Imagine again that you are seven years old. This time you have just woken up for the day, but it is not Christmas. It is not any holiday, but still there is no school to go to.

Imagine that you have to jump out of bed and rush to get ready because you have to get to work. Yes, work.

Imagine that you make clothing in a factory. You work up to 19 hours a day, and you get paid seven cents an hour with no benefits. No doctor’s visits ever. No dentist’s appointments to fear.

I didn’t think so, but you will buy clothing made by a child just like this.

Now don’t go running away with assumptions. This film is not nearly as preachy or uncomfortable as the last couple of paragraphs of this article. It’s actually a very entertaining, humorous documentary despite the serious message it’s trying to convey.

Speculating on the actual question of just what Jesus would buy; Evelyn, a typical grandmother, puts it this way: “He might, with love and a bit of sternness in his voice, say ‘Look, you are reading scriptures, but you are missing half the message. Why don’t you learn about what to do about the poor? Why do the CEOs get 500 percent more than the one at the bottom?’”

Reverend Billy is banned from entering any Starbucks in the state of California for publicly bellowing statements out of his bullhorn like, “Starbucks, with a billionaire at the top and impoverished people at the bottom. Don’t spend $4 on a latte at this company!”

We see the good reverend enter a Disney Store holding a Mickey Mouse on high declaring the squeaky-voiced icon to be the Antichrist. On the street in front of the store, he yells, “The Disney Co. still presides over sweat shop facilities around the world.”

Reverend Billy has been arrested more than 40 times for his “performance activism.” We see him hauled away in the film as the crowd chants, “Let him go.” We see him and his choir shooed from many businesses and malls.

“I don’t know how Billy does it really,” says Billy’s wife, Savitri, who is also the director of the Church of Stop Shopping. “I don’t even know how many times he’s been arrested. Sometimes I worry. I think Billy’s gonna go to jail for a while. You know, it doesn’t slow him down at all.”

Why does he take the risks?

“If we were able to change Christmas, we would change the whole year,” he says in the film.

“The Stop Shopping Church [doesn’t] have the answer, and we are trying to slow down our own shopping. I think we have the question. We say ‘Stop shopping’ just to get your attention.”

“Certainly nobody can stop shopping,” offers James, the choir director, “but you can have a conscience about your shopping [and] think about how it affects other people. Just explore your options. That’s all we ask.”

Speaking with Reverend Billy made a lasting impression on me. As a last thought, consider this message. A message that says no matter what you do or do not believe, we need to be in control of our own reality. A message that says this season is about peace, rebirth and generosity of spirit that has been stolen by the corporations and the merchandisers. It has been repackaged and sold to us at a great expense.

What Would Jesus Buy? releases in select theaters Nov. 16.