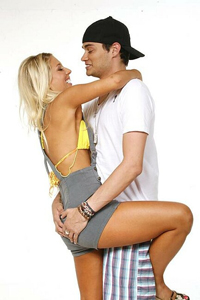 When I heard they were making a film adaptation of the classic literary work Beowulf, I thought, “Isn’t that the crap they tried to get me to read in high school?” The answer to that question is both yes and no.

Neil Gaiman – graphic novelist extraordinaire – has joined forces with noted filmmaker Robert Zemeckis to create a truly mouth-watering visual feast. This new Beowulf takes the poem we all know and hate and makes it something everyone will be talking about this holiday season.

Ray Winstone portrays the title character – a warrior who valiantly battles the evil Grendel (played by über creepy actor Crispin Glover). However, that victory opens up a new can of worms when the heroic protagonist finds himself on the shit list of Grendel’s salaciously slinky mother (Angelina Jolie).

From its early debut at 2007’s Comic-Con, the buzz has been good on this film. That, coupled with the dynamic list of actors appearing in it (Anthony Hopkins, John Malkovich) would make any movie buff an absolute fool to miss it.