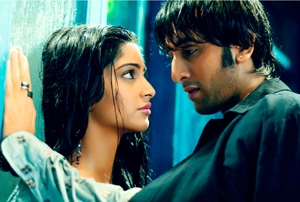 Bollywood has never looked better. Saawariya is the latest directorial effort of Sanjay Leela Bhansali (Black, Devdas ), and it’s hot! A lush palette of rainbow colors and dreamy sets flavor this Indian tale of love in its highest form.

Newcomer Ranbir Kapoor plays Raj, an obnoxious but nice kid with flashy clothes and rock ’n’ roll dreams. Through romantic serendipity his path crosses that of a beautiful stranger named Sakina (Sonam Kapoor). The next thing Raj knows, he’s fallen madly in love with the sweet and mysterious girl – only to find out that her heart belongs to a dark and handsome loner named Imaan (Salman Khan).

Saawariya is a term that signifies unconditional love regardless of outcome. It’s best personified in the azure-tinted god, Krishna, who can be described as the “Indian Aphrodite.” Throughout the film, Raj is referenced as that young lover who wears his heart on his sleeve while being completely consumed by his affections.

This romantic comedy is filled with all the charm of a standard Bollywood fête. The songs are gorgeous, and the outrageous choreography never disappoints. Most of the cast hails from celebrated families within the Bollywood industry, so each seems to know his or her way around the complex scenes.

A motley crew of secondary characters also adds supporting depth and comedic relief to the project. Celebrated Bengali actress Rani Mukherjee plays Gulab, the smart-ass but incredibly astute hooker with a heart of gold. She, along with veteran actress Zohra Sehgal, rounds the corners and fills the gaps with rock-solid screen presence.

Saawariya reminded me of Moulin Rouge with an Indian cast. But like Moulin Rouge, Saawariya – at times – loses itself in all its prettiness, only to plod along aimlessly. Coquettish giggling, gorgeous faces and starry-eyed glances can only take you so far.

Director Bhansali milks his attractive cast for all it's worth. The end result is a good movie that might have been great, minus about 30 minutes of dead weight.

Saawariya is currently in select theaters.