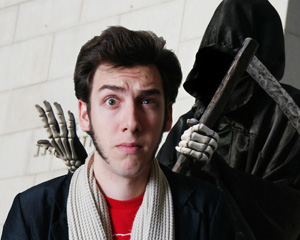 Logan Burdick, the executive producer of “Birnkrant 616,” a popular USC Webisode, loves to hate on Nazis. He’s been writing short films about Nazis since high school and is no stranger to criticism about it.

His latest venture is a TV show about what would happen if a bunch of dim-witted, unacculturated Nazis moved into USC dorms and tried to deal with the trials and tribulations of college. Outside of its controversial premise, the show sticks to several well-defined collegiate tropes: debauchery at frat parties, nerdy boys pining after haughty, thankless girls and virgins desperate to lose their virginity.

It’s mostly the Nazi theme and Burdick’s decision to make light of it that pushes boundaries and raises important questions. Burdick happens to be Jewish, but if he were not, would it be acceptable for him to make light of the Holocaust by making light of the Nazis that facilitated it?

At what point, if ever, are we as a society “over it”? Does this apply to other catastrophes, like 9/11?

Basically, it doesn’t matter; Burdick is selling a show and a perspective. He thinks that we can either see Nazis as vessels of evil or completely incapable morons.

He thinks – in what he calls the Mel Brooks school of thought – that as long as people consider Nazis the pinnacle of evil, others will seek to join them and will admire their quest. However, by considering them morons and making fun of them, we take away their power and render their existence completely ridiculous. The suggestion is that we can reclaim and recast the meaning of “Nazi.”

This view lends a certain abrasive quality to the rest of the show, unless you buy into Burdick’s premise and find Nazi jokes funny. These controversial viewpoints and the show’s general “edginess” may be considered a direct result of its fiscal independence.

“We have free rein to do whatever we want, because we don’t have to answer to anyone. Political correctness turns off anything that’s funny,” remarks Burdick.

So where does he draw the line?

“The line needs to be scrutinized.”

Apparently, Burdick’s principle concern is that his material is funny and his work is good. He’d also like to help revive the sitcom genre.

“I would like to see the sitcom not die. I like the idea of sitcom situations, but with a filmic look ... I think in time, the idea of the situational comedy will come back.”

In truth, most episodes focus on the day-to-day grind of stereotypical collegiate life, which is as situational as it gets.

“It’s like ‘Seinfeld,’ but instead of Jerry’s apartment and going to work every day, it’s Gary’s dorm room, and you’re going to class every day.”