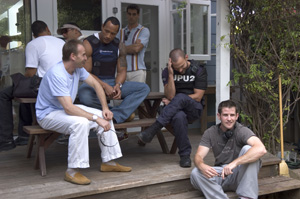 Twenty-five-years-old and fresh out of film school, Richard Kelly had just directed what was to become the cult sci-fi phenomenon of 2001 – he just didn’t know it yet.

“We were re-cutting, and I was really frustrated and angry,” states Kelly. “I felt like my career was probably over, or ending, or in the process of ending.”

The movie in question was Donnie Darko, a foreboding, strange depiction of the end of the Tangent Universe. Even after favorable reactions at Sundance, the film had failed to find a distributor, and Kelly was fed up.

“I wanted to write something about my frustration with Los Angeles,” he says, “an apocalyptic comedy, something that could act as a tonic.”

From these troubled times in Hollywood came the impetus for his follow up to Donnie Darko, Southland Tales. Depending on who you ask, the movie is not easily summarized, as cast member Dwayne Johnson (WWE’s the Rock) remembers the first time he was approached for the lead role of Boxer Santaros.

“I said, ‘sure, send the script over,’” recalls Johnson with a smirk, “and my agent said, ‘no, Richard wants to meet with you before you read it.’”

He continues, “We had a very long meeting, but I came out of it trusting him, even if I didn’t completely understand. He’s very passionate about his material.”

Considering the plot, Johnson offers, “I think it’s a black comedy about the end of the world. But there’s so much going on.”

Not just filled with plot twists and a large ensemble cast of “Saturday Night Live” alumni, pop culture stars and familiar character actors, the film is a vast array of ideas, styles and genres. And it was, infamously, too much for the Cannes Film Festival when it was pre-released in the summer of 2006.

“We knew for a sci-fi movie the budget was really low, around 15 million,” says Kelly. “But we scrambled to make it work. We knew we had to do it really fast, find a way. And we did.”

In rough cut form at 163 minutes without any of the visual effects on what Kelly predicted was a “one in a million chance,” Southland Tales was entered in the Cannes Film Festival. And lightning struck.

“They said they wanted to nominate us for the Palme d’Or, and it was like, holy crap, we’re not gonna be finished in time!” Kelly explains. “It was a dangerous move, but it was a huge honor we couldn’t refuse.”

But the tradeoff was just as painful when, rife with high anticipation, Southland Tales finally screened to almost universally scathing reviews, mass confusion and even boos.

“Cannes made it seem like it might not happen,” says Kelly, finding himself potentially back in his Donnie Darko predicament of five years prior.

“When you direct, you’re like a father,” Kelly continues, admitting anxiety over the prospect of letting down his actors. “I would’ve been devastated if it hadn’t gotten properly finished and released.”

Ultimately, Sony did buy the movie and showed enough faith in the project to pump another million dollars into the budget to complete the missing effects shots.

Kelly did his part as well, cutting out almost 20 minutes of material and strategically adding narration (by Justin Timberlake) to help flesh out some of the more confusing moments for audiences.

“We tried to create this big political satire about the apocalypse and make it accessible to a wide audience. Others may disagree,” Kelly explains, “but Donnie Darko turned out to be very commercial in its own way. I hope the same audience will turn out for Southland Tales.”

“Trust” is a word that is echoed by several of the performers of Southland, in regard to Kelly and his vision for the material.

“Working with a director like Richard,” explains Johnson, “you can see that it comes from here [holding a hand to his heart], and he’s very analytical of each scene. Mandy [Moore] asked me in our scene if I knew what was going on in the movie as a whole, and I said, ‘no, but, when I tell you the world is about to end, I’m going to mean it.’”