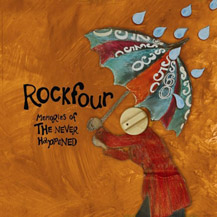 Want to take a fantastic journey without the mundane restriction of things like maps and seat belts? It’s usually a bad thing if you say that a band doesn’t know where it’s headed, but in the case and context of Rockfour’s music, it’s a wonderful thing.

The trip starts with a drone of melodic guitar; an ambient texture that just begs the mind to hop on and ride. The instrumental is called “Glued,” and the implication is that you’re not really going anywhere so there’s no need to be worried at mid-song when you start hearing that “ping” noise that is unique to a floundering submarine.

You can be trapped in a watery grave if you want to be, but the rest of Memories of the Never Happened is full of more appealing opportunities, played out (with words) as mellow psychedelia mostly of the Pink Floyd kind. “No Worries” recalls Todd Rundgren’s work with Utopia, and the very adventurous “Dear Truth” makes no bones about lifting, albeit in a skewed way, the guitar riff from the Byrds’ “Eight Miles High.”

The album closing “Lady Jette” sounds like it could be a lost track off the Wings album Band on the Run – a perfect example of Memories of the Never Happened.

Memories of the Never Happened is currently available.