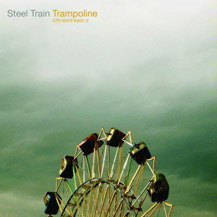 The opening cut on Trampoline is called “I Feel Weird,” and the song lives up to its name with lyrics that can leave the listener feeling kind of creepy. The tune is apparently about losing a female loved one (girlfriend? wife? sister?) in the 9/11 terrorist attacks and has a lyric that references “planes hitting the towers” followed by a repetition of “and the fire burns.”

While the listener is picturing the Twin Towers aflame, singer Jack Antonoff adds a little to the last repetition: "and the fire burns for you.” So the image changes from a death-trap inferno to a mere boy-misses-girl sentiment in a nanosecond, based on a rather tasteless play on words.

That might not be so creepy if the song weren’t delivered with an upbeat sing-along bounce that sets the listener up for the shock at the end. Whether considered good songwriting or cheesiness – it’s guaranteed you’ll feel weird, indeed.

The rest of the album is not so dramatic, but Steel Train has a big, full sound that borrows heavily from the masters of that style, U2, on “Alone in the Sea.”