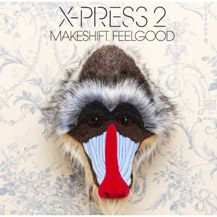 X-Press 2 is an aggregation of DJs lead by Ashley Beedle, and Makeshift Feelgood is primarily a collection of dance numbers. But this album is just as much fun for the ears as it is for the feet as Beedle puts some fairly esoteric influences on display.

The album leads off with a neo-gospel tune called “Give It” that features vocal work from Kurt Wagner of Lambchop, who mostly narrates the song as opposed to singing it, only joining in with the cooing background singers on the chorus.

“Witchi Tai To” is modern dance music, but the lyrics come straight out of the time machine – the song, really a Native American chant, was written in the ’60s by Jim Pepper and a version by Brewer & Shipley got lots of airplay on underground radio at the time. For his take, Beedle has Polyphonic Spree’s Tim DeLaughter doing the chant – a perfect choice.