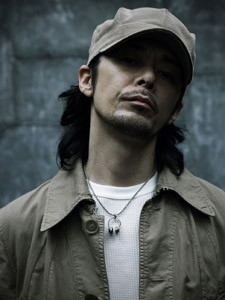 Just along the 405 freeway, on the west side of Los Angeles, a small crowd waits to greet a legend. DJ Krush, known around the globe for his consummate skill both as a DJ and producer, waits inside, taking in the evening as he premieres his DVD History of DJ Krush.

“I observe things. Lots of things,” Krush explains. “The everyday life, meeting people, listening to other people’s music, reading books, being in nature – everything. Inspiration comes from everywhere. So I observe these things, digest it inside myself and put it out there as music.”

His musical journey began in the ’80s, when he first watched the film, Wild Style. Amazed with the creative energy of hip-hop, Krush purchased two turntables and set his goal to make his mark in the genre.

He first gained recognition in Japan as part of the hip-hop group Krush Posse. By 1992 the group disbanded, a turning point for Krush.

“Back then I already had a family. I had to feed them,” he says. “Music is what I wanted to do with my life. I was so determined to make it big as a musician. I don’t have anything else. I barely have an education. If I don’t have music, I have nothing. I just wanted to stick to it and keep at it.”

He made his mark by being the first DJ in Japan to perform alongside live musicians. Sticking with his dream, Krush made his debut as a solo artist with the release of his album, Krush.

The new DVD, History of DJ Krush, is a visual and aural journey that spans DJ Krush’s career. It’s an intimate conversation with Krush – a humble and determined DJ from Japan – speaking to us through the universal language of music.

Track selections from his catalogue are paired with footage captured from studio sessions and DJ performances. It’s a definite nod to his most recent album Stepping Stones.

“Stepping Stones is sort of like a greatest hits album,” Krush says. “I put together songs from my past, and I remixed the whole thing. Since I have a huge library of [video] footage, I thought ‘Why don’t I make a visual work with a similar concept?’”

DJ Krush is driven to continually explore and create. Not one to rest on his accolades, Krush understands the big picture of his musical journey.

“I got into my career because of hip-hop. It got me into DJing. Hip-hop taught me how profound music is, because of that I am grateful. Now I want to bring the people my own hip-hop. Not just a copy of other people’s. My own original stuff.”

Many people credit Krush as one of the first international hip-hop talents to make a name for himself worldwide. Krush recognizes that these days, the music doesn’t always take center stage.

“Obviously hip-hop has gotten so huge,” he says. “It has branched out to so many different styles. But I have very mixed feelings about it, because it has also become so commercial.”

His ability to bridge his artistic passion into critical acclaim makes DJ Krush and his work legendary. Recently, he was invited to perform at MOCA as part of the exhibition opening night for Murakami, a profound visual artist.

“I really admire Murakami as a successful artist with a worldwide career,” Krush shares. “I never imagined I’d be part of his event. It was an unexpected surprise when they asked me to perform. When I was spinning, he [Murakami] was even right in front of the speaker dancing!”

After wrapping his North American tour and the release of his three-DVD set, the world eagerly waits for DJ Krush’s next step. A busy man on the move, Krush has a long calendar of performances in Korea and across Europe. We’ll have to wait before he returns to the studio.

“It could be really depressing,” he jokes. “It’s about time I make the new album.”