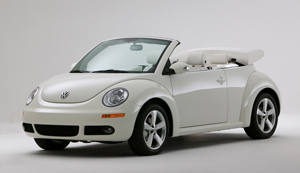 When VW announced the New Beetle a few years ago, there was a frenzy to get one. It was “the car” to be seen in for a few months.

Well, that was a few years ago. The New Beetle body style is now nine years old and has long been surpassed as the car to own by, among others, the Mini Cooper.

Before we dismiss the Beetle as an impractical car (held prisoner by the insistence of designers to echo the original beetle shape) we have to reckon with the convertible.

It’s cute all over again. VW was years late in bringing it out – they should have pushed it back in the ’90s.

But it’s a well worked-out car. The top, electrically powered, goes down easily. It perches in an unusual way, folded up projecting back out over the back of the trunk, like the original Beetle Cabriolet tops.

The top is cloth, not the cheap vinyl that used to be common on American convertibles, and looks expensive. It’s lined for quietness and has a glass back window.

Even though it copies the original Beetle shape, which means poor space utilization, it still is theoretically a four-seater convertible, and there aren’t that many competitors in the four-seat convertible field.

Now for a sour note: no trunk room. Oh, there is a trunk, but I’ve seen glove compartments almost as large. That’s because when they altered the Beetle sedan to be a convertible, they robbed half the trunk room of the sedan. So why are we recommending it? Because it’s cute. It makes a design statement – “Hey, driving around in this is fun.”

Wallace A. Wyss is the co-host of “Auto Talk” radio show, which has run every week on KUCR-FM Riverside for 13 years.