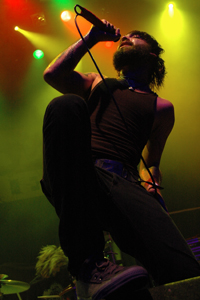 OK, when did it become cool to like Chiodos? Yeah, they’re a cool band but since when has this fact become so widely recognized? And who mandated that everyone and their brah jump on the bandwagon?

Maybe they’re not that pocket-sized band that precious few once knew about, let alone actually liked, but after listening to the band’s latest album, Bone Palace Ballet, that shouldn’t come as any surprise. Though their musicianship was never anything to scoff at before, the Michigan natives brought the creative artistry to match it on their newest effort and have effortlessly translated it into their live show as well.

Starting the night, Scary Kids Scaring Kids would prime the audience for the ear-shredding they would later receive and preview just how wild said audience was prepared to get. Though keyboardist Pouyan Afkary stole the show, both behind his instrument and away from it as he jumped into the crowd at every opportunity possible, the band played a set that was as high energy as it was emotive.

Emery would follow and play a similarly chaotic set, though an ever-changing center of attention on the stage may have hindered how relatable the band was despite their intensity and charisma.

Closing the night, Chiodos showed that, no matter how quickly they may downplay their own abilities or how big their following is, they are indeed doing something special with their music. Bringing their audience to a heated frenzy from the start of their set with “The Undertaker’s Thirst for Revenge is Unquenchable,” the band had no trouble later slowing to show off its softer, more spacey side.

As guitarist Jason Hale displayed how evocative he can be on his axe with “A Letter From Janelle,” frontman Craig Owens showed his skill at doing the same with his voice and just might have proven himself the undisputed top vocalist in modern rock right now.

Finding the perfect balance between unapologetic shredding and emotional vulnerability, both musically and lyrically, maybe Chiodos was meant for bigger things all along.