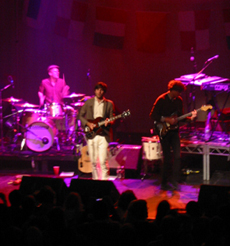 Synergy. That was decidedly the word floating on people’s tongues at the Music Box when the show started with a talented Swedish duo who appeared to be the visual definition of the word.

“We are Johnossi,” the lead singer told us, referring to himself and the only other person on stage, a drummer. “I’m John and this is Ossi. We’re from Sweden. Sweden fucking rocks.”

As the opening band it was up to Johnossi to warm up the crowd, and warm it up they did. It got so warm that John was forced to take his shirt off in order to sing the lyrics of their song “Man Must Dance.” “You, you, you, you … you’re just an animal developing too. You, you, you, you … a monkey needs to dance and so do you.”

After Johnossi left the stage, I made my way up to the balcony entrance, but was stopped by a security guard.

“You need a red wrist band to go up there,” he told me.

I put forth my wrist for his inspection. I had three wristbands: one purple, one green and one with a small animal farm on it. Unsure of what any of my wristbands implied, he decided that one of them probably gave me balcony access.

While looking down at the crowd I asked someone near me what she thought about the Shout Out Louds, the headlining band. She told me she liked them because they sounded like a Swedish cure.

“A Swedish cure for what?” I asked.

As I listened to their music, I saw her point. They did sound a bit like the Cure, but they all looked distinctly Swedish, except for lead singer Adam Olenius, who looked like Jason Schwartzman playing the main character in a Wes Anderson film about a Swedish indie rock band that sounds like the Cure.

The highlight of their set came when two band members from legendary Irish band the Pogues joined them on stage. As James Fearnley played his accordion and Spider Stacey blew his tin whistle and sang “Streams of Whiskey,” the Shout Out Louds quickly became my new best friends.

It reminded me of that age-old axiom: “There’s no better way to close a synergistic night of Swedish indie rock than with a rousing tribute to the founders of Celtic punk.”