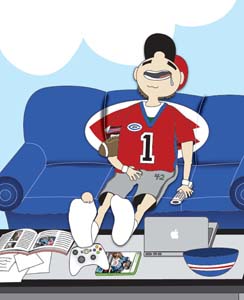 “Run the play anyway! Use your imagination! Call an audible! Improvise!” I usually end up screaming at the television screen. No, please don’t run that same beer commercial for the eighth time in the last 10 minutes. Woop! There it is …

And as much as some Americans think there’s nothing to learn from elsewhere, I think some Canadian rules and other tinkerings would make professional and college games much more watchable.

1) One time-out per half. If the offense or defense doesn’t like what they see on the other side of the line of scrimmage, too bad!

Adjust! Deal with the play! Why should the other team be punished because they maybe have an edge on you?

2) The pros should stop the clock to move the chains for a first down, just as they already do in college football. Combined with only one possible time-out per half, the two-minute drill gets much more exciting.

3) End zones are 20 yards instead of 10. If you like touchdowns more than field goals, this is the ticket.

Besides, if the offense has gotten it near the goal line, why should the defense get a break by having such a short field to defend? Oh, but we can’t mess with the game?

Just where did that punt seem to go out of bounds while it was way up in the air?

5) Eliminate the fair catch. I have no problem with the safety factor. Simply mandate that no defender can be within five yards of the receiver at the time of the catch.

6) Revert back to the old standards for intentional grounding. The whole “outside the tackle box” is not just stupid, it’s unfair. If field position is so important, why punish not only the defense that’s already out there but their offense as well?

7) Goodbye artificial surfaces and fixed domes. You do not belong in a sport that prides itself on toughness. Besides, if you’ve never played football in the mud, you haven’t lived and you might not understand.

8) Announcers should fill us in on terminology once in a while. “Man under” comes to mind; to the uninitiated it means that there is man-to-man pass coverage underneath with zone responsibilities deeper.

Reminds me of the Dodge commercials about Hemi engines: “That thing got a Hemi?” became a catch phrase even though 99.9 percent of the population can’t tell you anything about a Hemi – though you’d better act seasoned around the garage.

9) Announcers, please stop saying, “There’s a time out on the field.” Really? On the field? I wouldn’t have known! I might have thought there was a time out at the snack bar, in the parking lot or the restroom.

10) If players want to celebrate a score, let ’em. You don’t want them to? Then stop them.