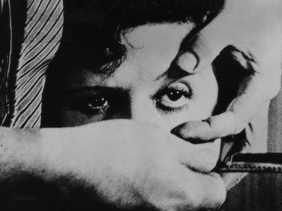 LACMA’s been on fire recently – literally, as you watch the sparks fly from their adjacent construction site. With Dan Flavin, Magritte & Contemporary Art and now with Dalí: Painting & Film , the museum has cemented itself as one of the world’s leading cultural institutions.

If there were a draft for curators as there is for football players, LACMA’s been very lucky of late. Dalí, much like Flavin and Magritte, is as much about the arrangement of the art as the art itself.

We’ve all seen the surrealist’s paintings before, but not like this. Projected throughout the exhibit on various walls are a number of the artist’s films, including the iconic (eye-conic?) Un Chien andalou, which depicts an eye being cut by a razor.

Lesser known than Dalí’s work with Luis Buñuel is his obsession with the Marx Brothers – especially Harpo, to whom he sent a harp with razor-wire (Harpo sent back a picture of bandaged fingers) - as well as his belief that there were only three surrealists working in Hollywood: Walt Disney, Cecil B. DeMille and the aforementioned kin.

Freud is given most of the credit, and thesis work, for Dalí’s mise-en-scènes, but editing techniques – montage, dissolves, close-ups – and a host of similar filmic devices deserve just as much attention.

Leaving the exhibit, thousands of plastic ants spell out a cursive “The End” against a Hollywood-gold wall. You’ll be wishing for a sequel.