The Other Side of AIDS: (Hazel Wood Pictures) 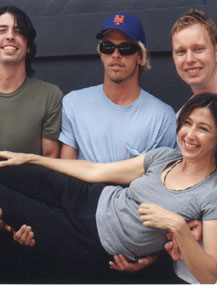 Most recently screened at L.A.’s AFI Festival and currently seeking distribution, The Other Side of AIDS – a documentary by writer/producer/director Robin Scovill – is making its way into the public consciousness. While the film’s premise is both sincere and serious, tackling the country’s overall loss of the multi billion-dollar war on AIDS, its execution is far less interesting than its subject.

The film, which opens at a Foo Fighters concert benefiting "Alive & Well AIDS Alternatives," takes on a hefty load while attempting to examine things about AIDS that the media and members of the medical profession don’t want people to know. Since AIDS burst onto the scene in the early 1980s, it’s always been common perception that anyone diagnosed with HIV would get sick, contract AIDS and then die. The Other Side of AIDS provides a counterpoint to this mainstream view, though, documenting stories of HIV survivors as well as people in the science and medical professions.

Perhaps the biggest counterpoint argument in the film revolves around Christine Maggiore, wife of writer-director Scovill, who was diagnosed with HIV in 1992 and who has been living a medicine-free life ever since. She’s a happy, healthy wife and mom who, simultaneously, is the founder of "Alive & Well," author of What if everything you thought you knew about AIDS was wrong? and the inspiration for the film itself.

Maggiore has a lot of passion to get her point across, as do Scovill and the dozen or so people – scientists, doctors, professors, HIV and AIDS patients – who appear in the film. The main problem with The Other Side of AIDS, though, is that it comes across as a monotone-like array of talking heads rather than the gripping documentary it should probably be. Granted, anything revolving around a topic as sensitive and controversial as the AIDS virus is automatically somewhat gripping, but The Other Side would better permeate the public consciousness if it traded in a few of its many interviews for a little more hard evidence.