Relient K: Anything But Boring 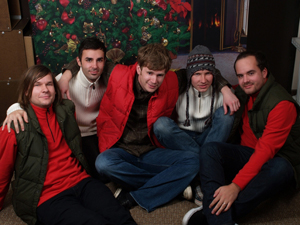 If Matt Thiessen, at the age of 15, had not been bussing tables, he may not have had the impulse (or the money) to buy a guitar despite absolutely no knowledge of how to play the instrument, and Relient K may have never come to be.

“We used to make fun of [Hoopes] because it was such a crappy car,” jokes Thiessen, “but it became kind of iconic.”

Thiessen speaks on the phone from Iowa, where Relient K is currently touring with Switchfoot. The two bands are good friends, making things easier and more enjoyable because “there is no initial awkwardness,” says Thiessen.

Though he’s moved from high school bands to nationwide tours, the 27-year-old singer and songwriter maintains, “I’m pretty boring … I like to do nerdy things, and I play darts all the time.”

Still, with five full-length albums (three of which have been certified Gold), several top 40 hits and music videos that have made it to MTV’s Top 10, Thiessen seems to be anything but boring.

From the get go with their eponymous first album, Relient K, Thiessen has liberally applied wit and amusement into his work with songs such as “Sadie Hawkins Dance,” which Thiessen claims has nothing to do with his high school experiences, but is rather “just a happy and fun song that we wrote a long time ago.”

At the same time, he has touched on more serious subject matter in songs like “Which to Bury, Us or the Hatchet” and “Let It All Out.”

“Well,” Thiessen says, “I really just think about things that go on in our lives … and it’s cool when someone e-mails us about a song and tells us that ‘it was as if we were in his mind.’”

Drawing from a variety of influences such as Ben Folds, the Beach Boys and the Starting Line, the band didn’t always sound like it does now.

“We thought we were going to be Blink 182 or Jimmy Eat World Jr.,” laughs Thiessen.

The most notable influence on his music, though, is his faith. Still, despite Christian themes in his songs, Thiessen insists on eschewing labels: “We like to think of ourselves as just rock ’n’ roll, but really, we don’t care what you call us.”

Of course, this doesn’t mean that he’s denying that faith is important in his music.

“Faith plays a role in my music,” Thiessen says. “Whether it’s struggling with it or living with it, I just want to write something I can personally connect with.”

And it certainly hasn’t prevented people from enjoying their music. With their sixth release Let It Snow Baby ... Let It Reindeer, a Christmas album, the band is still going strong. Having been together for more than seven years, Relient K has evolved and changed along with its members.

When asked about going back to the studio, Thiessen is unsure. The other band members usually live in different states, and they’re currently still in the midst of touring.

Whether Thiessen makes the pun consciously or if his wit has just become second nature remains unclear. But with the wide range of songs he’s written, recorded and performed, does it really matter?