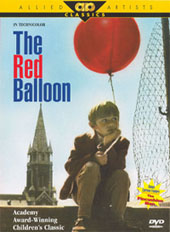 It has been more than 50 years since the release of the classic award-winning films The Red Balloon and White Mane by director Albert Lamorisse. Captivating children and adults since the films’ original releases in the 1950s, Janus Films and Red Envelope Entertainment have restored the classic flicks, which premiere nationwide Nov. 23.

White Mane, which won two awards in the same year, the Prix Jean Virgo in 1953 and the Grand Prix for Best Short Film at the 1953 Cannes Film Festival, captures the growing companionship between a young fisherman and a stallion named White Mane. During their friendship, the young boy is determined to help the stallion escape from his caged life.

Yet another heartwarming film by Lamorisse is The Red Balloon. Winner of the Palme d’Or at the 1956 Cannes Film Festival, The Red Balloon tells the story of a little boy roaming through the streets of Paris and his special bond with his red balloon. Other children in the neighborhood become jealous once they see how close the boy is with his balloon.

The Red Balloon will be presented with minimal French dialogue and English subtitles, while White Mane will be shown in a new English translation.