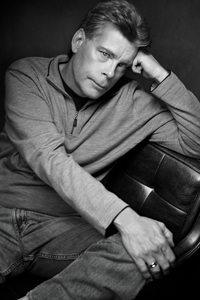 Unsurprisingly, Stephen King is not the most upbeat guy. When he says things like, “Every night when I go to bed, and nobody popped a rogue nuke somewhere in the world I feel this combination of ‘I can’t believe we escaped for another day’ and gratitude for the fact that we made it to the next day,” it’s easy to think of him as someone’s cynical uncle bumming out the family at the Thanksgiving table.

But he’s not; he’s a wry middle-aged guy who happens to be the most successful and prolific horror writer of his generation, and the greatest popularizing force in the genre of horror since the 1970s.

The Mist takes one of his short stories (written in the ’70s and released in the ’80s) and teams him up again with director and writer Frank Darabont, who has been in charge of bringing less monster-based King stories to the screen, like The Green Mile and the certifiably classic The Shawshank Redemption.

Of course, The Mist is not a prison morality tale. It’s a sci-fi slasher with a Lord of the Flies edge. Following the exploits of a group trapped inside of a grocery store after a frightening and apparently deadly mist takes hold, the story shows a group of normal people broken into factions, their moral sense distorted by fear.

Darabont nonetheless sees some parallels between The Mist and previous King movies he has worked on.

“I would dispute that Shawshank is a different kind of story because the commonality is that Steve King never lets you down in terms of writing a muscular human story,” he says.

“Here’s a movie that was made by an adult,” he says, “it isn’t part of the splat pack, young guys who haven’t come to the realization yet that this is as serious as any other genre.”

While it’s seriously crafted, the film doesn’t lack for the cussing, archetypal characters (townie hicks, the crazy woman, the feisty old lady, etc.) and disgusting violence and thrills of a high-powered horror movie. King sees The Mist's style as a cut above.

“Frank does good work, this thing has a different look,” King explains. “I don’t want to sound like a critic but it has sort of a documentary feel, it’s separated from other horror movies from the past years because of that.”

For all the tension, thematic depth and stylistic flourish, King has no problem admitting: “To a degree it’s about big bugs, too.”

The Mist releases in theaters Nov. 21.