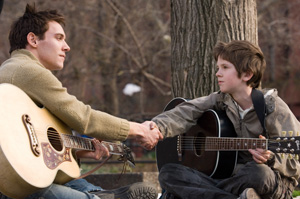 I don’t really care for musicals. I have a problem with people bursting into song at the drop of a hat. Then again, August Rush is not that kind of musical; it’s actually quite good.

August Rush (Freddie Highmore) is the stage name of a young musical genius – an orphan who uses his music to reach out and try to find his birth parents. Before being introduced to young August we meet his dad, a charming Irish guitarist (Jonathan Rhys Meyers) and his mom, a sheltered young cellist (Keri Russell).

The lovers have a chance liaison one magical evening above New York’s Washington Square, but are soon torn apart by her manipulative father. She gets pregnant, but believes she loses the unborn child after a car accident. The truth is that the woman’s father snatched the baby away and gave it up for adoption.

Fast forward 10 years later and young August is performing on the streets of New York and cared for by a mysterious stranger, played by Robin Williams. No one does crazy quite like Williams, who delivers a complicated performance.

Williams's character is something of a monster; but in the end we just feel sorry for him. He too was an abandoned child and musical prodigy who never made it, just like the orphans he takes care of (and uses).

Terrence Howard is delightfully understated, but unfortunately underutilized as the manager of the adoption agency, trying to help reunite August with his mom. All in all, it’s a very engaging film. The cinematography is breathtaking, and the music is captivating.

This is the first film I have seen in a while that effectively portrays the city of New York as a character itself. There is an element of whimsical fantasy to this story, however, that stretches the limits of believability. Still, for the child in you who still believes in happy endings, this is a good time at the movies.