Love in the Time of Cholera: (New Line) 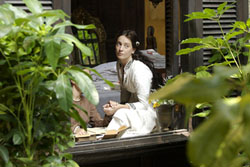 Love in the Time of Cholera shows that sometimes desire knows no boundaries. Javier Bardem stars as Florentino in this adaptation of the best-selling novel bearing the same name. As a young man, his sights are set on the fair Fermina (played by sexy Italian actress Giovanna Mezzogiorno).

He woos her. She swoons. He pledges his eternal love to her, but her father (John Leguizamo) isn’t having it.

So he waits. And waits. And waits, only to discover that she is no longer interested in him. Years pass and the two have led very separate lives. Fermina, with her doctor-husband (Benjamin Bratt) and Florentino with ... over 600 women! He’s slept with practically the entire continent of South America – all in an attempt to put the love of his life out of his mind.

Finally, in old age, the opportunity arises for these lovers to find their way back to one another. But do they?

The book-to-screen adaptation is also sporadic in places. Too much time is spent with the Florentino character as he whines and pines over Fermina. Meanwhile, not enough emphasis is placed on the true nature of her feelings for him.

Then, there’s the casting. With so many talented members of the Latino community just aching for a big break in Hollywood, I’m surprised that someone like Liev Schreiber was chosen to portray a Colombian character.

Love’s underlying message, “How long would you wait for love?” is capably executed, but lacks the same depth and cohesion of a film such as 1992’s Like Water for Chocolate. Still, director Mike Newell has an entertaining romantic drama on his hands.

Love in the Time of Cholera is currently in theaters.