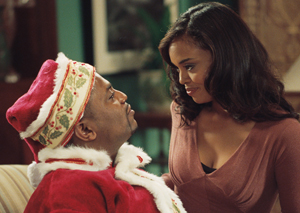 There’s no such thing as the perfect family or the perfect holiday – that’s the premise of this genial comedy as six siblings return home for their first family reunion in four years.

Devine, in the all too familiar matriarchal role, plays Ma’ Dere, a hard working and spiritual disciplinary who is looking forward to having her six kids back home for Christmas festivities. Naturally, things never go quite as planned as each sibling arrives with a caseload of secrets, lies and drama causing long simmering disputes to boil over.

Spearheading the chaos is a collection of amiable characters: Baby (Brown), the only child still living at home, is secretly nursing a burning desire to launch a singing career whilst his brother Claude (Short), a Marine on active duty, is AWOL, having taken his absence with consent. Lisa (King) has a cheating husband whose infidelities she must confront, and Quentin (Elba) is a saxophone player on the run from gambling debts.

As the flick progresses, even more secrets are revealed and old rivalries are hashed out, but by the end, love conquers all as the quarrelsome clan puts aside its differences to celebrate Christmas, soul food style.

“It’s a universal story,” says producer Will Packer (Stomp the Yard) who reunites with Short and Brown.

“There’s nothing uniquely African American about it. It’s a story about a mother who raises six kids who leave the nest, but come back together as a family, and it’s through the hope, faith and strength of their family that they persevere through some real challenges.” With splashes of humor, a slice of action and an eclectic ensemble, it's Soul Food meets Crooklyn at Christmas in this fanciful family flick. There are several memorable scenes, including one in which Lisa confronts her cheating husband Malcome (Laz Alonso) about his extramarital affair while he’s taking a shower by splashing baby oil over the bathroom floor to ensure she gets the last word.

King also gets to bare some flesh with a small seduction scene and credits her toned physique to a lot of hiking.

“I do a little bit of cardio but mainly hike a lot with my dog. I didn’t realize how well it was keeping me in shape until I was in shape,” she says.

Brown, in his second movie role, has some rather dramatic scenes as well as two musical performances. Though he claimed to be nervous, he received several accolades and admiration from all his cast members for his portrayal of Baby.

“I was definitely nervous especially with the A-list of actors and actresses in this movie,” says a modest Brown, who was previously seen in Stomp the Yard.

“I wasn’t sure if I would be able to pull it off but just sucked it up and went into it. I’m grateful for the praise and all the respect that they give me. I didn’t really think people thought about me like that.”

Safe, simple and predictable with no specific plot to drive things along, what saves This Christmas is the genuine chemistry amongst its stars.

“The chemistry came naturally,” claims London, who credits Short with her decision to join the cast. “I am friends with Columbus and when he called me and told me about it and who was in it, I told him to sign me up! This movie was special, and whenever we hit the set together we always had fun.”

Despite its overly melodramatic moments, predictability and episodic style, there aren’t too many flaws in This Christmas, which celebrates the bonds at home and shares a commendable central theme – the importance of family, especially at Christmas.

With likeable characters played by sturdy actors, its charms outweigh any pitfalls, for there is plenty of genuine onscreen chemistry, vivacity and humor among its star-studded cast.

This Christmas releases in theaters Nov. 21.