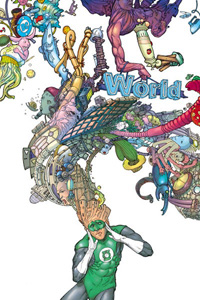 The buzz surrounding Fisher’s work started with the hardcover graphic novel Green Lantern: Will World, released in 2001. Fisher also worked on Happydale: Devils in the Desert and Fantastic Four/Iron Man: Big in Japan.

His pages are filled with bold colors, monsters and beasts in a surreal environment. In 2003, Fisher was nominated for a Will Eisner Comic Industry Award as Best Penciler/Inker for Flash: Time Flies and Vertigo Pop: Tokyo. He went on to contribute designs to the adventure video game “Myst III.”

Secret Headquarters has available for purchase two mini comics: Bob’s Life and The Man with a Thousand Noses. Also on exhibit is a never-published mini-sketchbook featuring his concepts and layouts for Batman: Snow.

Copies of Fisher’s Marvel and DC work will also be on hand at the show. All proceeds from the art, minis and books will be going toward an educational fund set up for Fisher’s son.

Touting itself as a sophisticated take on the comic book store, Secret Headquarters is the appropriate setting to see the work of such a celebrated artist in the comic and gaming industry. Though Fisher had an early departure from this world, he left behind extreme visions of a world fit for the imagination.