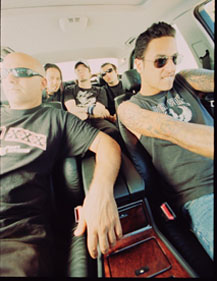 If you’ve ever seen Strung Out in concert, you know that they always have their amps set on "scald." This day, that’s an especially good thing for their fans in Detroit, where Rock City has morphed into Frostbite City. Sitting in the band’s tour van, singer Jason Cruz looks forward to hitting the stage and heating things up.

"It’s pretty cold! Nothing’s open right now so we’re chillin’," Cruz puns. "I’m sure it’ll be better tonight; we’re playing St. Andrews Hall and it’s a good size venue. I think it was either an old church or an old homeless shelter at one time."

Strung Out has endured many similar situations in their 12-year career and Cruz clearly remembers the band’s formative days in Ventura County.

"We pretty much all went to high school together in Simi Valley," Cruz says of his hometown. "It’s a small little redneck town. When you’re into punk rock in that kind of situation, you find each other. Jim’s (the late Jim Cherry, the band’s original bassist and founding member) dad used to own a carpet store and we practiced in the back of it for about three years.

"Then we got some shows with NOFX and got signed to Fat Wreck Chords. We were the fourth band signed to Fat, and have been touring ever since." And that has made for lots of afternoons spent chillin’, whether it’s cold out or not.

The newest Strung Out release, Exile in Oblivion, is the band’s fifth album, full of "dark, heavy and technical punk rock." Cruz is still writing lyrics that seep out of the seamy underbelly of life, giving his gritty songs titles like "Vampires," "Angeldust" and "Lucifermotorcade." It might shock some to realize that Cruz hasn’t spent a lifetime wallowing in the gutter to get his inspiration; instead he finds it in travel, something he also credits with sparking his interest in painting.

"I got my education by traveling around the world at a young age. It’s good to get out and get on the road and meet people," Cruz enthuses. "I got to visit all the places I read about in art history. Our first tour as a band was in Europe and we were all pretty young, but we went headfirst into it. Europe, Canada, Australia and Japan are like second homes to us. It’s an ongoing cycle and you tend to get a different perspective on the world.

"Then I have a girlfriend who’s in college right now and she fulfills that education thirst I have," he continues. "I think it’s a pretty fulfilling and enlightening life."

Cruz got to show off his music and his painting talent when Strung Out held a release party for Exile at 9 Star Action Sports Shop in Los Angeles, where 13 of his paintings hung on the wall while the album blared and the band signed autographs.

"It was about time I got off my ass," Cruz laughs. "I was tattooing for a year and I didn’t really like that. I have more fun painting."

Cruz found the skate shop to be the perfect venue to introduce the band’s new material.

"We’re close friends with the guy who owns the place," he says, adding that, "The whole philosophy behind the shop is that they don’t want to be ‘corporate’ so they have art openings and are supportive with a little skate park out front. I love skateboarding and we’re down with the whole lifestyle."

With his many talents converging, there’s no telling where the future will take Cruz and Strung Out. To keep fans on their toes, he throws them a little curve ball at the beginning of "Analog," the first tune on Exile. "That’s [late jazz singer] Billie Holiday singing. There seemed to be a lot of dispute as to what the first song was going to be, so you have your first song right there."

Exile in Oblivion is currently available.