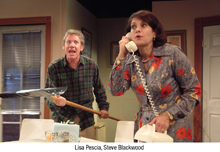 When an advertising executive, Mel Edison (Steve Blackwood), is laid off from his job, he wanders around his Upper East Side apartment on the verge of a nervous breakdown in Neil Simon’s black comedy “The Prisoner of Second Avenue.”

Everything is collapsing around him, and he’s beginning to lose his grip on reality. Mel’s life is in the toilet (and even that isn’t working properly).

The apartment building is not only expensive but cheaply constructed. The only thing he has going for him is a loving and supportive wife, Edna (Lisa Pescia).

When the apartment is robbed in broad daylight, it’s the last straw. Edna takes him to a psychiatrist. To pay the enormous bill, she jumps back into the workforce after a long absence and becomes a secretary.

Mel’s brother Harry (Robert Trebor) and his three sisters – Pearl (Irene Roseen), Pauline (Sheila Shaw) and Jessie (Veronica Alicino) – are concerned about Mel’s financial situation. They vow to pitch in and help pay the bills, but they have their own ideas on how to help him recover from his psychotic episode.

Simon is touted as a grandmaster of American Theatre. His hype is over-exaggerated, but “Prisoner of Second Avenue” is a clever comedy about the aggravations of daily life when life looks its bleakest.

For a man of a certain age, unemployment can be crippling. When it’s further exacerbated with a miasma of negative events, it’s difficult to crawl out of the self-destructive hole. Simon examines these events and spins them with humor.