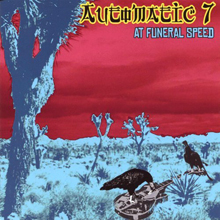 This punk trio was last heard from in 2000 when they released Beggar’s Life through Vagrant Records. The long layoff was necessitated by record company re-jiggering and infighting amongst the band, some of which was fueled by substance abuse. All of this is aside now, and any fans who’ve been sitting around hoping for something new will not be disappointed.

Automatic 7’s sound is amazingly simple to describe: they sound like Social Distortion. And just like a good Social D. album, At Funeral Speed rocks along with consistently good songwriting and a couple of standouts.

The gems are tucked into the middle of the effort; the slow-burn of “Ghost-Like” at track seven leads into “Greasy (Revisited)” and sets the listener up to be blown away by the masterful “Fall in Line.” A video of “Broken Record,” a non-album track, is included as are videos from several other bands.

Grade: B At Funeral Speed is currently available.