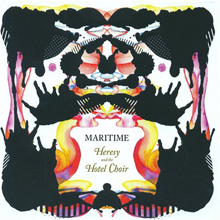 Maritime is fronted by Davey von Bohlen and Dan Didier, late of the Promise Ring. The pair writes all of the songs here (co-credited with band mates Justin Klug and Dan Hinz), and the material is strong.

Lead track “Guns of Navarone” can be taken a couple of different ways. The title refers to a real battle that took place during World War II where insurmountable odds were (barely) overcome.

Whether the song is meant to reflect a man/woman relationship or the band’s struggle to compete, it comes down to one thing: perseverance. The message gets across clearly, and the song invites listener participation, so before you know it you’re overcoming adversity, too.

The band plays a little trick on listeners about half-way through the album as it performs “Peril” and “Pearl” back to back; the songs are very different musically but the lyrics are the same, altered only slightly to represent either a positive or a negative outlook on life. Hmm.