Mishka Shubaly: How to Make a Bad Situation Worse 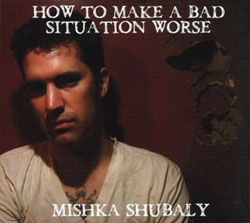 Shubaly has a gift for quotable, droll asides. On opening cut “The Only One Drinking Tonight,” Shubaly admits he’ll “settle for a tall glass of anything” and confesses, “If I’m a bad drunk/Then it’s not for lack of practice.”

During hangover blues ballad “Kick Off YR Halo,” he concedes, “I want to die, but I’ll settle for sleep” and “I’m still alive or what passes for it.” Shubaly’s rough but sympathetic barroom voice suits his tragic tales, particularly on the record’s best songs, “When I Was Young,” a tribute to a friend who overdosed and road-weary roots rocker “Gideon’s Bible.”

Grade: A How to Make a Bad Situation Worse is currently available.