EXTRA Cans for the Needy: Mike Hennessey helps the homeless help themselves. 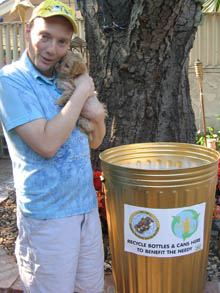 Few businesses beyond coffee shops are guaranteed a crowd when they open, but P&S Recycling is one of them. When the clock ticks 8:30 a.m., the clientele roll in, eager for business.

Pushing shopping carts loaded with clinking plastic trash bags, the customers will sidle up to one of the huge collection machines and begin the arduous process of dumping in their wares.

“They come in every morning with their little bags,” says Luis Ribera, in Spanish. Ribera is an employee of P&S Recycling. “We see them almost every day, it’s their work. Many of them are homeless.”

Los Angeles is a Janus-faced city, simultaneously crowned the entertainment capital of the United States and a slightly more dubious honor – the homeless capital. According to the Los Angeles Homeless Services Authority, 73,702 Angelinos wander the streets of the city without access to shelter.

And though it seems the differences between the two sides are such that the twain will never meet, one man found a way for Hollywood’s hopefuls to help the hopeless. For the last year, Mystery Mike Hennessey has been a man on a mission: to do what he can to alleviate the pain of homelessness.

An extra on shows like “Monk” and “Boston Legal,” and hit movies like Live Free or Die Hard, as well as a children’s entertainer to the stars, Hennessey knows the ins and outs of Hollywood society as well as its film sets. It was this knowledge that led him to establish EXTRA Cans for the Needy.

While working on the set of “ER,” Hennessey noticed one of the craft services ladies hauling huge bags of recycling out to the dumpsters with the intention of throwing them away.

“I remember thinking that somebody could really benefit from those bags,” he says. “What could I do?”

It was then that what he describes as the “epiphany moment” swept over him.

“I had a vision of people coming off the intersection giving those bags to the homeless,” he says.

“My friends and I went up to the craft services table in full drag and asked if they could donate to the homeless,” he says. “We got nine or 10 huge bags.”

The idea behind recycling for cash is a simple one: at the checkout counter every time a plastic, glass or aluminum container is purchased, a small tax called the California Refund Value is placed on the item. By taking the can or bottle to a recycling center like P&S, that five or 10 cents can be recouped, but few people ever bother.

If that seems like a pittance, multiply that by the huge quantity of cans it would take to completely fill a 30-gallon trash bag, and it all starts to add up.

Separating the recyclables this way isn’t just a convenience for the homeless, but a lifesaving measure. A dumpster full of bacteria is the last place anyone would want to put their hands in, particularly when the goal is to find potentially sharp objects like broken glass bottles or open aluminum cans.

To minimize this risk, Hennessey made gold cans that he placed on the sets of “Monk,” “Everybody Hates Chris” and “Nip/Tuck” in order to encourage recycling and establish a safe method of collecting and distributing the recyclables.

“The gold cans let them know it’s not garbage, it’s for them,” he says. “These are human beings, and we treat them like rats.”

The gold cans have been spreading slowly but surely. Most of their success has been by word of mouth, including as much promotion as Hennessey and his friends can do with special events like brunches and comedy nights. They were there at the L.A. Film Festival and on Earth Day with the mayor when he “turned the city green.”

Once the cans and bottles are collected and separated, Hennessey and his team drive by and gather up the bags to hand to homeless people as they see them.

“Many object to giving homeless money because they’re afraid of what they’ll spend it on,” Hennessey says.

That’s never been a concern of his. EXTRA Cans is an effort to help the homeless help themselves.

“We’re cheerleaders, getting people excited about this,” he says. “We are the first to put a face on recycling. We want to raise awareness and help our fellow man.”