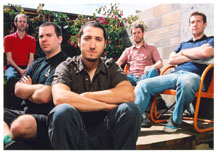 Members from former bands Heavy Vegetable and Thingy – Zach Smith and Robert Crow, respectively – collaborated in January 1998 to form Pinback, a side project that can best be described as an atmospheric Beach Boys-meets-Sunny Day Real Estate. Six years and five recordings later, the duo has picked up light speed in the indie world with their penchant for lyrics that transport listeners through the heart’s emotions while still ensuring you can bop to their upbeat music.

Though one half of Pinback was recovering from a cold, the night’s performance seemed to be a healing remedy. The San Diego hometown boys played in the slightly frosty Avalon theater to an near full-capacity crowd that was more than ready to warm up by dancing to the fun melodies and harmonies of the two singers, accompanied by musicians who filled with drumming, synthesizers and additional guitars.

On a nationwide tour in support of the recently released Summer in Abbadon, Pinback delivered a few tracks from the album, but the bulk of songs came from earlier recordings including Microtonic Wave, Tripoli and Manchuria. All night, fans were screaming requests for the song that may perhaps launch Pinback to the forefront of the independent music scene, "Penelope."

After joking that the song wouldn’t be heard that night, Pinback launched into the song at the end of the set, playing it with a much faster tempo and turning the Avalon into a virtual dance club, making it a much warmer concert experience.