The Smart Car: A Car Built Perfectly For Two 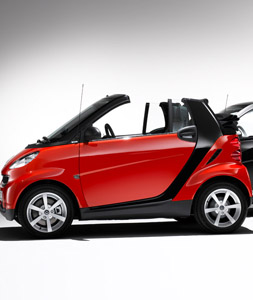 What’s going to be the trendiest car to own, after the new Mini? The answer is the Smart car.

Theoretically retailing at a base price of under $12,000, Smart cars are an amazing 40 inches shorter than the Mini, oh-so-cute and very fuel efficient, equivalent to a hybrid at 40-45 miles to the gallon.

The Smart was originally developed by Mercedes for the Swatch watch company, which was able to think “outside the box” when it came to car design, since Swatch is in the watch business, not the car business. Over 700,000 cars have been sold in Europe.

In the United States, industrialist Roger Penske, a one-time racecar driver and now car dealer, is backing the importation and selling it through cooperating dealers. Allegedly, 30,000 Smart cars have been reserved to date through the Smart USA Web site.

When you sit inside the Smart Fortwo, you feel like you’re in a regular-sized car. It only has two seats, which explains the trendy name “Fortwo.”

Smart cars are available with options like air con, sunroofs or as what Smart calls convertibles. The convertible option jacks the price up to $16,500.

In the United States the Smart will be offered with a small 3-cylinder 998-cc engine about the size of a liter bottle of Pepsi and made by Mitsubishi, which meets emissions standards. The zero to 60 mph time is around 13.3 seconds, and the top speed is electronically limited to 90 mph.

This is definitely a car for single people and has barely enough luggage room for your laundry.

It’ll be a great “starter car” for students who’ve never owned a car. I predict it will be so popular that some campuses will have special Smart-only parking lots.

Wallace Wyss is the co-host of KUCR-FM’s “Autotalk” show, broadcast weekly from Riverside on 88.3 FM.