Sol Tryon: Living Up to His Potential in The Living Wake 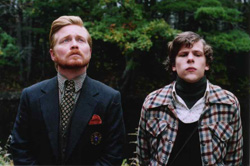 “I consider myself a storyteller,” says Sol Tryon, director of The Living Wake.

Eleven years ago, Tryon took his first steps into storytelling as a production assistant and then an assistant director. His new film, The Living Wake, marks the first time he has taken on the role of director.

On working with everyone on the film, Tryon says, “It’s a wonderful dynamic.”

Tryon speaks from New York, where he currently resides. The film, though, is shot in Maine, where he grew up.

The proximity to his home gave the shooting process a “family community” feel for Tryon. The crew’s closeness helped them persevere through the toughest conditions as well.

“We were shooting the night exteriors in Maine at two in the morning,” recalls Tryon, “and it’s freezing cold. Then the camera goes down. At this point, I just grabbed a Super 8 and continued shooting, trying to get everyone to keep up their spirits, and thankfully after 15 or 20 minutes the cameras worked again.”

Tryon describes this as a “sink or swim moment.” The kinship everyone felt on set propelled them forward, despite less than ideal conditions.

“Everyone just sucked it up and put in the effort,” says Tryon, with a tinge of pride for the crew.

Although his first foray into directing had its share of obstacles, Tryon wasn’t completely unprepared. His work as an assistant director provided him with a firm step toward filmmaking.

“[Being an assistant director] allowed me to know about all the processes and how to manage everything,” states Tryon.

Nor was he alone in the filmmaking process. Writers Peter Kline and Mike O’Connell worked with Tryon to bring the film to life.

“We were like a three-headed creative monster,” laughs Tryon.

Originally intended for a 20-minute one-man show, Kline, O’Connell and Tryon took the idea and expanded it into The Living Wake. The film chronicles the last day of one K. Roth Binew (played by O’Connell), a self-proclaimed artist and genius who is dying of a disease “almost as grave in its vagueness as it is vague in its graveness.”

Together with his best friend and biographer Mills Joquin (Jesse Eisenberg of The Squid and the Whale), Binew tries to make the last day of his somewhat pitiful life into something mythological, capping it all off with a living wake. Ridiculous, hilarious and touching all at once, Tryon manages to direct with an artistic flair that harmonizes with the talented actors.

In particular, Eisenberg’s subtle and unrestrained Mills next to O’Connell’s bombastic K. Roth Binew results in some truly hysterical moments.

“Jesse was a godsend,” adds Tryon.

The character of Binew, though, is all O’Connell.

“I see elements of [Binew] in different people in my life,” muses Tryon. “But Mike is the bloodline.”

Together, Tryon and O’Connell have created a unique character. Some will sympathize with the other people in the film and find Binew annoying, though others will see themselves in Binew, and others may observe Binew with a detached amusement. No matter how one sees him, though, there’s no doubt that K. Roth Binew is unforgettable.

Having helped forge a character and a movie so distinctive, Tryon plans to branch out even more – he’s already taken the initial steps to do so by completing his first script. Even though he’s moving towards bigger and better things, Binew will always maintain a strong presence in Tryon’s career, what with Binew’s poetic languishing, (seemingly) spontaneous song and dance and of course, his living wake.

And if Tryon could have his own living wake?

“I’d have it in Maine, where I grew up and filmed the movie,” says Tryon. “Or Mexico, where I got married … and I’d have everyone there. I just hope that I’m fortunate enough to be able to do something like that.”

In a sense, Tryon’s already accomplished just that – his own Living Wake.