The Diving Bell and the Butterfly: (Miramax) 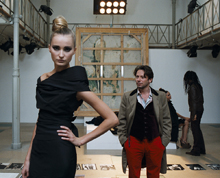 Imagine the horror of waking up one day, trapped inside your own body. Your mind is alive and your thoughts are clear and coherent. Your desires, your needs, plain as the nose on your face. And yet, after numerous attempts to communicate even the smallest bit of information verbally, you discover that the unthinkable has happened.

Jean-Dominique Bauby was the editor of Elle magazine in France. In 1995, he suffered a stroke and woke up nearly three weeks later in a hospital bed.

The prognosis was mixed. Many friends and family members seemed nervous about how to interact with him. Still, through much determination, he learned to communicate with his doctors, therapists and loved ones by blinking his left eyelid – the one part of his body with which he still had freedom of movement.

The Diving Bell and the Butterfly (based on Bauby’s bestselling memoir) is yet another extraordinary directorial effort from artist Julian Schnabel (Basquiat). With quiet suspense and an eye for warm colors and composition, Schnabel makes it easy to build interest in this attractive and thoroughly interesting man. Bauby’s life, his past loves and most importantly, his work, are all examined as they unfold via flashback.

Actor Mathieu Amalric does his subject a wealth of justice; he doesn’t play him as someone to pity or fear. Instead, as Bauby, he allows viewers to party with an absolute rock star – one who was struck down in his prime, only to rise again like a phoenix.

The Diving Bell and the Butterfly releases in select theaters Nov. 30.