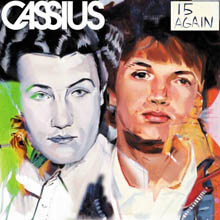 Over a year after its release in France and the UK, Cassius’ third effort, 15 Again, has finally graced the states, proving an electronic album that’s still fresh long after its first overseas arrival. Philippe Zdar and Boom Bass, also known as Cassius, have managed to create an energetic magnetism that surges throughout the album’s duration.

Each track has its own unique personality, with a style tailored from funk, house, pop, rock and reggae, and is often coupled with one of a diverse roster of guest artists. The Le Knight Club-produced “See Me Now” is a chilled-out Marley-fied hip-shaker, while “Toop Toop,” the album’s first single, rocks the floor with a dance-rock sound like that of the Rapture. The infamous Pharrell Williams also comes aboard, lending his production and vocal skills to the dramatic eco-friendly track “Eye Water,” the most intricately composed song on the record.

As the saying goes, much like fine wine, the French house pioneers only seem to get better with age.