We Are Wolves: Total Magique
(Dare to Care) 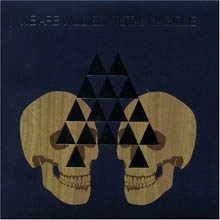 The sad thing about a band like Montreal’s We Are Wolves is that several years from now, no one will remember them for Antonin Marquis’s viciously beaten tom drum, or pull out an album like Total Magique simply because the craving is there.

Realistically, they’ll be passed over and forgotten because casual music fans won’t bother to recall which “wolf” band was which during this decade of blog hype, and because We Are Wolves – from liner art to highly synthetic pop-rock sound – merely follows the pack (pun intended, unfortunately).

A solid live band with a knack for making forgettable albums, We Are Wolves’ sophomore effort is a danceable but bland party record, pure fluff in the long term for its plastic-sounding guitar and rather dating combination of preprogrammed beats and authentic drumming. This capped off by lyrics that read like bad high school poetry, or worse, an ESL student’s plea for love: “Sometimes I cry/you make me really sad girl/you put a spell/now I’m a voodoo doll” (from “Walk Away, Walk”).

The shouted vocals get old, the songs are formulaic. In all, another addition to the pile of second-rate dance punk that’s attempted to help define the mid-2000s.