Die Another Day: Halle Berry tries to dodge the post-Bond Jinx after winning the gold 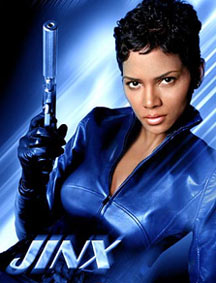 In the tradition of Pussy Galore, Mary Goodhead and Xenia Onatopp, Oscar-winning actress Halle Berry’s character in the new James Bond spectacular, Die Another Day, goes by the name of Jinx. However, the moniker is more than just the usual "Bond Girl" double entendre.

First and foremost, it’s a part that for once puts a Bond girl on an even playing ground with our martini-sipping hero. Berry took the role of Jinx because she is character that is Bond’s equal, an operative that plays an integral part in a plot that pushes the macho-yet-debonair spy and his fans into new and uncharted territory.

As the lucrative franchise enters its 40th year, Bond (Pierce Brosnan) finds himself questioning his loyalties to her Majesty’s secret service for the first time. After a hovercraft chase in a demilitarized minefield zone between North and South Korea with the evil Zao (Rick Yune), Bond is captured and tortured in a Korean jail. Betrayed by his country and left for dead, Bond is soon let free in a trade for Zao, whom Bond thought was dead. Driven by revenge, Bond jets to Britain and Iceland on the heels of megalomaniac Gustav Graves (Toby Stephens), who he believes is behind Zao’s rejuvenation as well as a plot to bring on WWIII.

When Bond encounters Jinx on a beach in Havana, her appearance triggers more questions than answers for the veteran super spy. All he knows is that’s payback time, and after a passionate interlude with her, he’s off to Graves’ ice fortress for some furious pyrotechnics in the finale.

This leads us to the second and most ironic facet of Jinx’s name. Despite the name, Berry’s career path over the past year has been filled with nothing but the purest of good luck. She is the first Bond girl to be awarded with a best actress Oscar (for Monster’s Ball), which flies in the face of the traditional career crash suffered by most actresses after their appearance in a Bond picture (i.e., Denise Richards, Tanya Roberts, Maud Adams, Lynn-Holly Johnson, Olivia D’Abo, etc.).

"It will always effect my life, and that moment will be with me always," says Berry of her gold statuette as she sits at the Four Seasons. She’s dressed in a transparent beige blouse——an outfit no less eye-appealing and flattering than the Ursula Andress-inspired bikini she wears to raise Bond’s spirits in Day.

And this bring us to the third reason we analyze Halle’s character’s name: Bond gals have traditionally had less than stellar careers after a roll in the hay with Agent 007 (Honor Blackman is painted gold, Diana Rigg shot, and so on). During Day’s filming, Berry almost found herself in a similar and frighteningly real-life fatal position after her rough-and-tumble sex scene with Pierce Brosnan. As the scene was written, Jinx lies on top of Bond, pulls out a knife, splits a fig and slips into her mouth.

"I cut the fig and then it got lodged in my throat," confesses Berry. "But Pierce shot up, got behind me and did something to make me spit it out." Brosnan’s Heimlich maneuvers had Berry blushing, but thank goodness Brosnan has the skills to be a hero on-screen and off-screen. After that incident, Berry couldn’t watch her steamy performance in the film since "it became so unsexy. We’d crack up because we knew what really happened."

The near-death experiences didn’t stop in the bedroom, though. Berry went through some serious training to ready her for her action scenes, which culminated in a femme-to-femme duke-out with expert fencer Rosamund Pike (Miranda Frost), the flick’s other Bond babe. However, nothing could prepare her for the day they finally had to put up or shut up during a sexy yet scary fight on a plane about to crash.

"She was a fencer and I was a knife thrower, so we had different trainers. But it was very choreographed," Berry says of the volatile vixen face-off. "We practiced the scene many times, but then we had smoke and wind and all kinds of other stuff thrown in and it was a hundred times more difficult. We had a few cuts, but no one really got hurt."

Luck came into play with all aspects of Berry’s participation in the film. According to director Lee Tamahori, Berry was considered for the role only after they "widened the casting net" for a role that was "originally written as a spitfire Latina." As he explains, "It bothered me because I thought we could keep the role ethnic, but expand it beyond a stereotype role."

Tamahori became interested in Berry after seeing her in Swordfish. He found the actress "astonishingly beautiful, but she could really be tough. I thought she’d say no, because it’s usually a career killer playing a Bond girl, but she said yes."

Fans hot for Berry after seeing her go head-to-head with Bond in Die Another Day will hardly have to worry about her career fizzling. She says she has six projects in development, some which she will star in, and some in for she will produce.

Berry will brush up on her dramatic skills with an unnamed romantic comedy as well as an Oprah Winfrey film, Their Eyes Were Watching God. And she’ll continue pursuing physically demanding action roles for X Men 2, as well as a remake of the ghetto-fabulous blaxploitation classic Foxy Brown.

In the case of the latter film, Berry’s take on the Pam Grier ’70s classic follow the example of fellow thesp Samuel Jackson’s reworking of Shaft. The film will be brought into a contemporary setting, and Foxy will definitely not be coifed with an Afro.

"I never thought I’d be an action star," says Berry of her alter acting persona. "I looked at it as merely evolving."

By the look of things, Berry’s career path is definitely climbing up the success ladder. And she won’t have to worry about the karmic ramifications of walking under one any time soon——Bond willing.