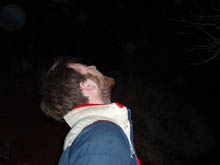 Eric Lindley’s affable presence is a sigh of relief. In a city where pretentiousness permeates the air, I am astounded by how genuine and warm he is when I meet him in a Silver Lake café, and how he greets me with a smile and lights up when he speaks of organic soymilk.

In person he is boyishly sweet, nothing like what his music entails: melodic acoustics under an affecting voice, singing lyrics that often evoke bleak images of a poignant world. When I compliment him on the stunningly nebulous “Fox and his Friends,” he explains that it is based on a 1975 German film of the same name in which an unlucky man named Fox, whose boyfriend gets arrested and loses his job, finds fortune when he wins the lottery. However, his friends take advantage of his new winnings, and eventually Fox lies dead in a subway station, his clothes pick-pocketed by two delinquents.

“It’s the worst thing ever,” Lindley laughs, “but the song is about that image.”

His quietly poetic album Eric Lindley is Not … Nightcat!, described perfectly by Lindley as “tongue-in-cheek, heartfelt and folk,” is a visceral record with quirk, irony and surprise. Aesthetically, it is an inventive blend of instruments with layers of experimental sound. He sings of themes not necessarily melancholic, but things that exist; the meanings are implicit so that listeners must imagine them for themselves.

Proof that Lindley is more than a musician but still an artist is, among many things, his profuse use of animal imagery in songs like “Saturday” and “Country” (“It was a long drive out to the country/to stuff acorns in our mouths and visit local oddities”).

“I think animals are really fascinating because they’re sentient, but you can’t communicate with them,” Lindley explains, “so they’re a weird kind of companion for humans, where we feel an emotional connection that we can’t really substantiate.

“Animals like dogs or cats or rabbits are also really associated with childhood. And yet, humans are animals, even if differentiated through this common language ability,” he says.

Nightcat! is even named after a feline companion he had as a lad (“I think it ran away within a few weeks,” he muses concernedly. “I don’t think it made it very far.”)

Born near the tranquil trees and mountains of Yosemite, he grew up in Orange County, where he listened to influential punk bands NOFX and Operation Ivy (he would later progress to folk singers Will Oldham and Vincent Gallo). He sang in his elementary school choir.

While most 6th graders were starting cliques, Lindley was starting rock bands. And keeping the tradition of bad pubescent band names, his was no exception.

“I’m really embarrassed to say but the one in sixth grade was called Jurassic Pork,” he snickers. “That’s the worst thing I’ve ever heard.”

It wasn’t until college that Lindley discovered his niche. The erudite pupil entered Dartmouth College as an Engineering major, not even considering music, but left with a degree in Music and Physics. During this musical progression he continued to write intensely, eventually spawning the first song he wrote that he actually liked: the bittersweet, transcendental “Bounce.”

After Dartmouth, the bookish Lindley headed back home to California to CalArts, where he is currently studying writing and music. Also keeping him busy is work on a second album, writing both fiction and lyrics (Charles Bukowski and Dave Eggers are influences/favorites) and playing select shows in intimate venues, of which he’s devising a new concept.

“What I do in shows is just play a bunch of songs, but I’ve been thinking about a more cohesive, almost theatrical story told through songs, because there are these scraps of images that don’t really come together.”

When he graduates from CalArts next year, he plans to embark on – shockingly – more school, and maybe teaching at some point. I tell him how impressed I am by him, but he humbly expresses that he feels he hasn’t accomplished anything yet, which of course, I think is absolutely ridiculous.

“I want to do a mix of things and music is going to be the biggest part,” he assures. “We’ll see what happens.”

Eric Lindley is Not … Nightcat! is currently available at www.soundssuper.com. For more information, visit www.ericlindley.com.